So, this month was fun.  I had 3 weddings to go to, one of which I was the officiant for, which is why I will now find every opportunity to refer to myself as Reverend.  And let me just say, I was really really good at officiating the wedding; I only messed up one time by accidentally referring to the bride as a man and it was totally cool because the laughter made everyone stop crying, so…win?  Anyways, here’s jokes. 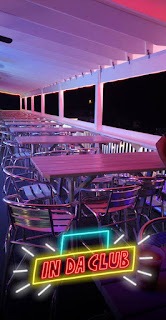 9/2
*showing the kids a close-up picture of Saturn*
Kahla: "Do you know what planet this is?"
Henry: "Venusaur?"
Kahla: "No, it's your favorite planet."
Abby: "Legoland!"
At least we won't have to pay for college.

9/2
I just saw a commerical for Maruchan ramen noodles on Food Network.
1. Who thought it was a good idea to juxtapose a guy making seared ahi tuna and grapefruit-molasses reduction with an ad for cheap ass noodles?
2. I never knew ramen noodles had commercials, I just thought everyone bought them because they're something you can eat for 15 cents.
3. How many millions of packs of ramen do they need to sell to make back what they spent on that commercial?

9/3
I was woken up early this morning by the kids posted up outside our bedroom door making fake fart noises. I ran them off and chastised them, so hopefully they understand now that if you're gonna wake somebody up with farts, they damn sure better be real ones.

9/5
Sometimes when I get a little stressed or anxious my phone lets me know not to worry.

9/5
I do weekly football picks with some family and friends. I try to make topical names for my pick set and this year I took my inspiration from a jaunty tune by Justin Timberlake.

9/6
In high school I had an English teacher that didn't know what irony was.
I wish I could show this to her.

9/9
I was out at a friend's wedding last night and I feel terrible today. Not because I drank too much. No, it's because I danced too hard. #Footloose

9/12
I like to start off my showers with comfortably warm water and then gradually increase the temperature until I could potentially host a crab boil.

9/13
Tomorrow I will be officiating my friend's wedding. I made myself a notebook for it. 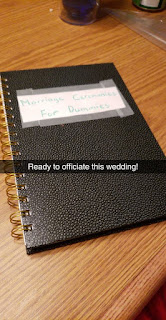 9/14
Now that I've officiated my first wedding ceremony since getting ordained, I'm henceforth going to refer to myself as Reverend. 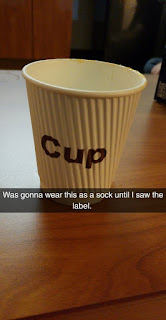 9/17
I'm so desperate for hockey season to start that I watched the movie Face/Off this weekend just because the title sounds hockey related.

9/17
Fact: As an ordained minister it automatically carries more weight if I say "Bless you" when you sneeze.

9/20
I'm really not a fan of the fact that cumin and cinnamon share many of the same letters and a similar color but have wildly different tastes and uses. Because it seems like, hypothetically, someone who isn't totally paying attention could possibly accidentally grab the wrong one from the cabinet and ruin my own fucking dinner.

9/21
My job entails me traveling between the different retail locations of our company. We refer to that as "floating." I'm a floater. I'm the company turd.

9/22
Current project: trying to convince my fiancée that our wedding vows should be a rap battle. 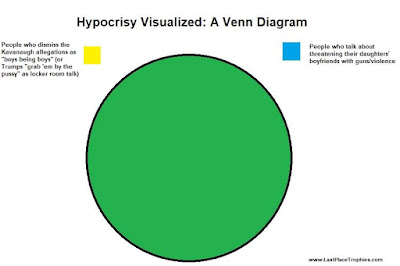 9/29
Abby wants to be Dorothy from Wizard of Oz for Halloween. I suggested that instead of carrying around a little dog with her, she carry a speaker that just plays "Africa" on repeat.

What an awesome way to end the month, with a nod to a fantastic song.  See you next month.