Bye Bye Bachelor Pad: How Life Has Changed Since Moving In w/ My SO

It’s been 6 months since my fiancée and I moved into the house we bought together.  Just in case anyone doesn’t know, prior to that I lived in an apartment with roommates for 7 years and before that I lived with my dad.  So, needless to say (but I’m gonna say it anyways because it ups my word count and I go into every article like it’s a school essay), my life has changed a bit.  And I could just leave it there, but boy that would make this a really shit article and despite the fact that I’m rather rusty, I am not that terrible at writing (I think).  So, let’s get into some specifics about how my life is different these days.

1.       I Don’t Do Dishes/Laundry Anymore
Don’t get me wrong, I still wash dishes and throw clothes in the washer and dryer.  I don’t want anyone to think that I’m some lazy asshole who pawns all of this work off on my fiancée.  But I no longer “do” the dishes or laundry because to do them would imply that at some point they will be done; that I will have achieved a state of done-ness.  This is not the case.  With 2 grown adults and 2 kids all contributing to the excess of dirty clothes and dishes, this is a never-ending task. Dishes and laundry are never completed.  They are never done. They are a universal constant. They are eternal.  They simply are.  I never do the dishes and laundry anymore, I merely co-exist with them. 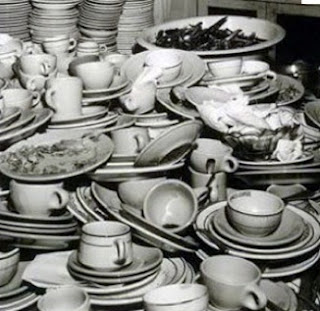 2.       I’m a Sneaky Snacker
When I was on my own, I ate pretty much whatever I wanted at any time of day or night.  Not so much anymore because me opening the refrigerator is like a dog whistle to 2 little gremlins/children/walking garbage disposals in the house.  Just as I’m about to take a bite of the last donut, here they come both asking for it.   Open up some chips, and next thing I know one of the kids has absconded with the bag.  The other night I was counting the minutes until bedtime because I wanted to eat a cookie without being harassed.    The positive to this whole thing is that sometimes I forget that I even wanted a snack, which I believe has improved my eating habits overall.  This may actually be how I stick to a healthy diet. 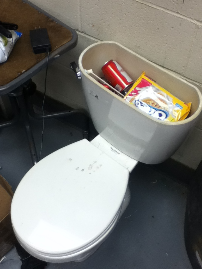 3.       I Don’t Have to Fight for the Bathroom
Living in an apartment with 1 bathroom for 3 people had exactly the kind of troubles that you’d expect.  There were actually times when either myself or one of my roommates would walk down the street to the gas station because we just couldn’t wait any longer for whoever was tying up the bathroom. Now I’ve got 3 bathrooms shared between 4 people.  It’s amazing!  I can poo in peace and on my own schedule.  I’m essentially living in the lap of luxury.  The one caveat to this is that I typically don’t get to pick which bathroom I get to use because my fiancée doesn’t appreciate the fragrance that emanates from the bathroom when I’m in there and the effect that it has on adjacent rooms in the house.  So the downstairs bathroom is essentially my own personal Dookin’ Dungeon. 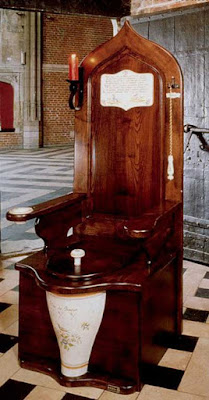 Getting this bad boy installed next week.

4.       I Have No Idea How Much Toilet Paper Is Left
This is a problem that arises from the fact that I now have more than 1 bathroom. See, when you only have 1 bathroom, you can keep all the toilet paper in that one bathroom and every time you change the roll, you know how much is left.  Now that I have 3 bathrooms, the toilet paper is kept in a centralized location (the hall closet) and rationed out to each bathroom as needed.  At any given time, I may know how much TP is left in one bathroom, but there may or may not be any backup supply in the hall closet to portion back out if needed.  Now, I’m not really one for living dangerously, so I cannot shake the feeling that I’m headed for disaster with this, but I will say that my fiancée is pretty on top of this whole situation and I think that is a great quality in someone I’m going to spend the rest of my life with.

5.       There Are Blankets FUCKING EVERYWHERE
This may come as a bit of a surprise, but I actually kept a relatively tidy bachelor pad at my apartment.  I’m not a neat freak by any stretch of the imagination, I just have a few habits like putting my wallet, keys and phone in the same place all the time so I don’t lose them, not leaving out food because I don’t want bugs, and trying to keep some semblance of organization in my clutter.  For instance, while I may have had a random assortment of papers, coasters, remotes and gaming controllers on my coffee table, I never left anything on the sofa or on the floor in the living room.  In my apartment I had a shelf in the laundry room where I kept extra blankets and pillows.  In the house we store our blankets wherever they fucking fall.  Seriously, it’s like we threw a huge party and instead of confetti we just had blankets raining from the ceiling.  Or that we built a blanket fort city in our house but then a hurricane rolled through and destroyed it all and now we’re looking over all the blankets scattered about and telling each other “We will rebuild.”  I don’t even know where all these blankets came from, but the kids are usually building a fort or spreading one on the floor for an imaginary picnic, my fiancée is typically wrapped up in one like a burrito because she is cold forever, and I am usually strolling through the house with one draped over my shoulders like a cape and pretending I’m a benevolent king presiding over my people because fucking whatever, sometimes you just gotta enjoy life instead of worrying about the blankets that are mysteriously multiplying in your home. 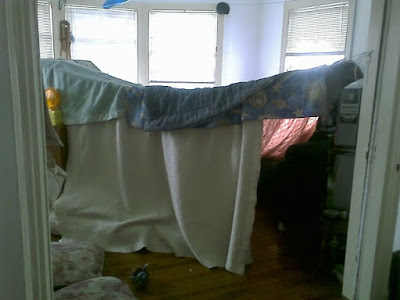 My kingdom in its former glory, before the Hurricane Fleece swept through the land destroying everything.

I could probably go on for a while about ways in which my life has changed from being a single dude in an apartment with no kids to being an engaged man living with his fiancée and 2 kids in a house that they bought together, but 5 items is a good place to stop a list.  And since I’ve heavily struggled with writing any new articles for like the last….ever, I’m going to try to save some ideas to hopefully parlay into even more new posts.  Maybe.  I hope.  I do think it’s important to note, though, that as different as things may be in my life now, I wouldn’t change it for the world.


As far as months go, November was one of them.  I’m still dealing with the after-effects of Henry barfing in the car.  I found new and exciting ways to embarrass myself in front of family on Thanksgiving, I actually wrote a new article for the first time in forever and I got to teach the general public a little something about jizzed up mattresses.  Anyways, here are the jokes.

11/1
The kids got really good remarks from their parent-teacher conferences, so I let them pick what they wanted for dinner. They picked McDonald's. I'm gonna need them to either start liking salads or start doing poorly at school if I'm going to maintain healthy eating habits.

11/6
On the one hand, it’s definitely nice to see so many people proudly voting today as they post their “I voted” selfies on Facebook. On the other hand, there are a few of these people that I wish would have just stayed home because I don’t trust them to tie their own shoes properly, let alone make an educated decision about the governance of a country. #MixedFeelings

11/7
I've reached a point in my life where making conversation with someone involves just talking about how tired we both are.

11/7
We have an alarm on our refrigerator that is supposed to let us know when someone forgets to close the door all the way, but what it really does is alert the entire house of when I'm gorging myself on leftovers after everyone else has gone to bed.

11/9
In my excitement over the Bohemian Rhapsody movie and my love for Queen, I opted to dress as Freddie Mercury to go see the movie. This meant shaving off my beard.
I have learned in no uncertain terms that this is not a face my fiancée could grow to love. 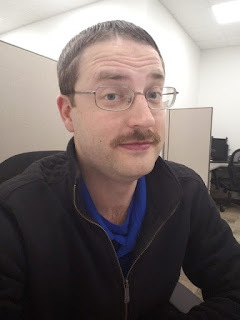 11/12
Personally, I think the most important thing that Catholicism has contributed to humanity is the movie Sister Act.

11/17
We were playing Jackbox and I had to assure my fiancée that the game had no idea what it was talking about. 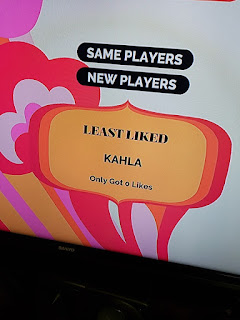 11/18
The real winners of Monopoly are the people that run out of money first because they don't have to spend the next several hours playing Monopoly.

11/19
Last night after getting their teeth brushed and pajamas on I told the kids to go to bed. Abby started crying because she was too tired. I have some serious concerns about her problem-solving skills.

11/20
Wanted to use this frame I had to put out a family picture at work. Now my family consists of me, Abby, Henry and Iron Man apparently. 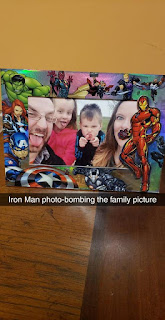 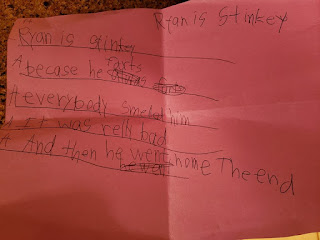 11/24
My family is coming to mine and my fiancée's house for Thanksgiving today. It's the first time my family has ever celebrated the occasion at my place and I'm pretty sure it's because they expected me to serve a dinner of pizza, hot dogs and ramen. 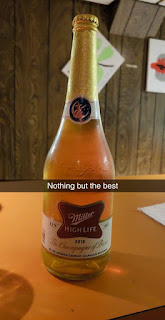 11/25
A little over a month ago I had some old friends over to the house and we were playing the new Jackbox Party Pack 5. One of the games on the pack is called Patently Stupid and if you've never played it before the premise is that you are given a bizarre, player-submitted problem and you have to come up with a ridiculous invention to solve that problem. During the game one of the prompts sent to me was "I wish I could get drunk faster" so, like any rational person would, I drew a beer being poured into a beer bong that was inserted into a butt. And I gave this product a completely appropriate name. Yesterday, Henry gave the following drawing to my dad and step mom as a suggested Christmas gift for me. 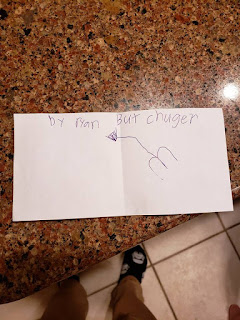 11/29
On days when it warms up a little and the sun beats down on my windshield, the smell of Henry's vomit makes a triumphant return in my car. It's pretty much the only thing that's ever made me appreciate the colder temperatures of winter and fall. Because of that, I can only assume that people who enjoy those seasons must have had someone puke in their car, too.

11/30
Something that I think many people don't know is that the warranty on their mattress is voided if there is any discoloration or staining on it. In accordance with this, we have to inspect every mattress return at work with a handheld blacklight to insure that we get credit from the vendor. Those of us who regularly have to use it affectionately refer this blacklight as Ol' Jizzy.

I have actually been (somewhat) diligently working on a couple more new articles for this blog and I can absolutely guarantee that at least one of them will be posted midway through this month.  Stay tuned.