Despite the fact that this is set to post on July 1st, I’m actually writing it on June 29th because I am set to leave on vacation in the morning and there is no way in hell I will have the motivation nor the wherewithal to write this the last night of the month like I usually do.   So, I sure hope I don’t just go on a joke-writing spree on June 30th, which is unlikely considering the rest of the month has been almost completely devoid of joke-writing for me already.   On a personal note, I’m a solid month into physical therapy now for the knee injury I sustained at hockey and that means I have spent my time being useless on the bench for my team, a noticeable change from my normal status of being useless on the rink.  Speaking of useless, I am at a full 8 months of some angry right-wing dingleberry attempting to troll both my LPT & personal pages on Facebook because of a Trump joke I wrote back in October.  I don’t have the heart to even block the dingus because he’s clearly starved for attention if he’s made commenting on my page his hobby.  Anyway, moving on from that joke of a human being to these jokes that I wrote.

6/9
One nice thing about needing physical therapy for a knee injury is that it absolutely guarantees I don't skip leg day.
6/11
Just thinking about that time when I was trying to get my first post-college big boy job and I read a tip that you're supposed to come to an interview with questions for the employer as well, but I didn't understand that it meant questions about things like benefits and office culture, so I'm sitting there asking dumb ass questions to the interviewer like I was writing a report.
What that article meant:
"What kind of benefits do you offer to supplement salary? And if I start in this position, what sort of opportunities for advancement are there?"
What I fucking did:
"According to Forbes, you've seen a 50% year over year growth, which is far higher than the industry average. To what do you attribute that success and do you feel it's sustainable long term?"
6/13
Had a dream last night that I marched into my previous employer's business, called a meeting with the owners and the GM, started the meeting off with, "first of all, fuck you" and then just continued to go off on them.
One of the most satisfying dreams I've had in a while.
6/19
There are a lot of Juneteenth posts out there today, which is great! There are also exactly the people you would expect posting angry comments about Juneteenth.
If you are mad about the celebration of Juneteenth, then you are exactly the reason why it is important.
6/20
I've got an electric toothbrush that automatically shuts off after the recommended 2 minutes of brushing. And now, on the rare instances I have to use a regular toothbrush I find myself endlessly brushing as I wait for it to shut off; my brain just completely ignoring that it's my own stupid hand doing all the work.
6/25
If you are friends with anyone who does not support women's bodily autonomy, FB has implemented a neat little feature to let them know that you are disappointed in their backwards thinking, and it's actually pretty simple to use!
1. Go to their page
2. Look for a spot on their wall that says "Write something to [Person's Name]"
3. Type in "Go fuck yourself"
4 Click the button that says "Post"
All done! Thanks for this feature, FB!
6/27
Practicing my Spanish and I stumbled upon the plot of Avengers: Endgame. 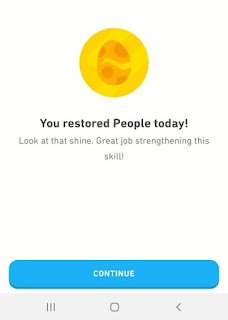 At the time of this being posted, I will be enjoying some Irish coffee while sitting out on a boat dock enjoying the lake.  I hope everyone else enjoys their holiday weekend except for those crap-stains on the Supreme Court, the garbage politicians that enabled them, and the dopes that voted those POS politicians into office.