Full disclosure, I was completely unprepared to put this month’s round up together.  Of course, being unprepared has historically not stopped me from putting forth a half-assed effort and these round ups are already a bit of a half-assed effort so today we are looking at a quarter-assed effort from me.  I’ve probably mentioned it before, but I am routinely surprised at myself each month by how many days I did actually post a new joke.  Of course, I have been leaning heavily on my silly virtual backgrounds to fill my joke quota, so I believe that takes this down to an eighth-assed effort.  If I actually had an audience for these posts, I am certain there would be people confused by my use of fractions to describe my effort, but since I'm fairly positive that I’m just writing this for an audience of me I’m not going to bother explaining fractions to myself.  What else happened this month?  Well, I clearly have fans within my community, I find new and exciting ways to annoy my wife, and is there a potential return of the frosted tips?  Let’s review the jokes.

I got a bad feeling about this. 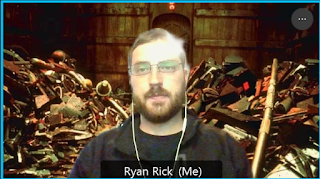 About to make the Kessel Run in less than twelve parsecs. 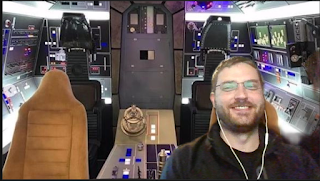 The power went out at home for a couple of hours yesterday, so I took swift action to ensure we didn't encounter any food waste due to lack of refrigeration. 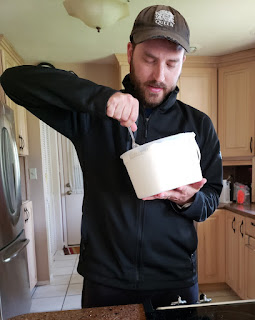 Me when someone asks how I plan to celebrate Bastille Day: 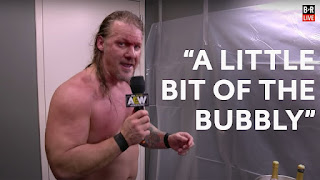 I had a run-in with some militant vegans yesterday. Personally, I'm not one to really care much about anyone else's eating habits, but these folks were apparently very mad about my existence, going so far as to insult me and suggest that I drink antifreeze.

Initially, I thought "What a terrible way to persuade anyone to their way of thinking. Didn't anyone ever teach them that you catch more flies with honey?"

Then I remembered that vegans don't use honey.

All I did was start making coffee and I immediately had to go to the bathroom. I have become Pavlov's Dog.

And this is simultaneously both highbrow and lowbrow humor.

My work team has unofficially declared Fridays to be "Sleeveless Fridays." I don't own any tank tops, but I feel like I nailed it on my first time participating. 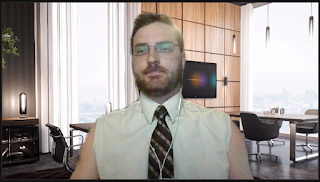 This morning I helped my son's Scout troop sell donuts for a fundraiser. They had 2 locations in town set up to sell, one of which I was helping at. One of the parents helping across town at the other location sent me this.

I'm making an impact in my community! 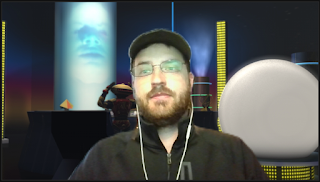 Honestly, this background is the only way I'd ever be caught in the vicinity of that much Chicago sports paraphernalia. 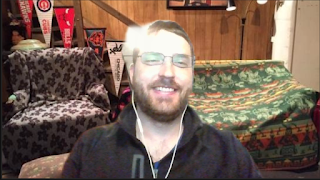 I've mentioned a few times now that I sing and dance while doing yard work. Today I was so deep into my performance of Bowling For Soup's "Girl All The Bad Guys Want" while trimming that the Amazon delivery person had to tap me on the shoulder to break me out of my trance and deliver my package. Gonna go ahead and assume that I was the best part of their day. 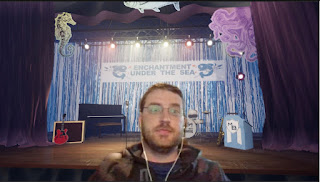 One of the community groups that I help run has a dedicated thread in it, pinned to the top of the page, to help those searching for housing solutions link up with those who can offer housing solutions. That was apparently not good enough.

This is like someone standing in the street shouting "I want a hamburger" and then getting snotty with you when you point them in the direction of a restaurant that has hamburgers on the menu because they wanted to stand there shouting until someone brought them a burger.

But I feel I handled this well. 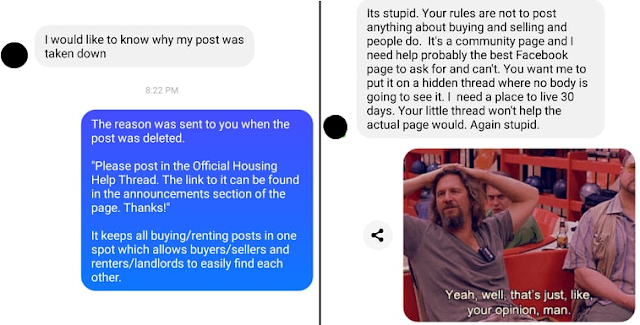 Opened the cabinet to grab a plate and found out my wife was annoyed with this clock's loud ass ticking this morning. 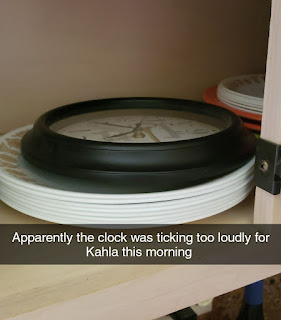 I think there are many Olympic sports that could be made more entertaining by having the coaches wear the same uniform as the players, just like baseball does. Certainly water polo would have to be one of the most amusing sports to potentially adopt that change. Watching the coach pace up and down the side of the pool barking orders while wearing a speedo and swim bonnet would be hilarious.

Last night my daughter asked me "Are you going to get that blonde stuff in your hair again? It's better than just brown."

So my wife and daughter clearly disagree on how cool my frosted tips were.

Walking around the county fair with my kids, we hear some roosters crowing.

New way that I've begun annoying my wife: randomly texting her the lyrics to the song "Cotton Eye Joe." 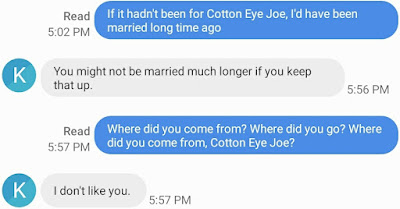 Assuming I continue to send my wife these texts about Cotton Eye Joe, next month’s round up could potentially kick off with me updating this about the status of my marriage.