I know I left a hint about this in my post about how much I hate fall, but I love hockey.  Specifically, I love St. Louis Blues hockey.   I mean, I’m a fan of the sport in general, but the most important team in my mind and my heart is the Blues.  I’ve grown up with them and I will grow old with them.    Now, anyone that knows even a little about the Blues should be aware that it’s not always easy being a fan; in fact, it can be downright heartbreaking sometimes.  We have 0 Stanley Cup wins.  And we have a history of underperforming in the playoffs.  And still, even with that, being a Blues fan is amazing.  So, just in time for their first game of the season tomorrow, here are 5 Reasons Why Blues Fans Are the Best.

1)      We Live On Hope
As a Blues fan, you start every season hopefully thinking “This is our year! This is the year we win the Cup!”  It’s standard fare.  Not that we expect to win each year, but we always hope that this is the year that we get the monkey off our backs.  We always hope that this is the year all the pieces come together.  We’re a bunch of people that believe in our team each year; unlike some of those jaded fans who just know that their team will suck.  We start off bright-eyed and ready to believe every single season.  And we end each season confident that next season will be even better, with cheers of “We’ll get ‘em next year, boys!”

2)      We’re Humble By Default
This may not make much sense, considering the previous point, but let me explain what I mean.  Because we aren’t one of those teams that is consistently favored to go all the way, we don’t face a huge letdown when we get eliminated in the playoffs.  We’re (hopefully) not the city that starts flipping over cars and lighting fires when our team gets unceremoniously eliminated.  We’ve been there, we’ve done that, we'll move on and look forward to next season.  We may be losers but we’re good losers.  And I’d rather be that over a sore winner.  We’re humble by default because we have to be.

3)      We’re Dedicated
Let’s be honest here: you don’t keep paying for tickets, watching games, buying merchandise and all around supporting a team with 0 Championships in 47 years of existence if you’re not dedicated.  And we are die-hard.  There is a reason we say that we bleed blue and it’s not because we’re nobility.  There’s a reason why we have the first 2 qualities I mentioned.  There’s a reason why we still hope that each year is our year and why we don’t turn on our team when they lose.  It’s dedication.  It’s also dedication that makes us walk to 14th & Clark in the blistering cold of winter, not wearing a coat because we want everyone else to see the Blue Note we’re proudly wearing (look forward to a future post about how much I hate winter).

4)      We’re Used to Being Marginalized
Okay, so being marginalized isn’t a positive thing, but it definitely adds to the character of Blues fans.   We’re used to being second-class citizens in our own city.   We are right in the heart of Cardinal Nation, so we’re used to getting pushed around in favor of baseball.  Our hockey coverage gets bumped to secondary radio and television stations in favor of baseball games.  We’ve seen parades down Market Street for the Cardinals and been asked “Where’s the Blues’ parade?”  We’ve even seen the Rams bring home a trophy.  And we take it all in stride.  We wait for our turn.  We’re not one of those teams whose fans brag about how many titles they have.  We’re the fans that brag about how much we love our team, even when we’re not the popular kids in town.

5)      We’re Family
Take all of the above qualities and put them together.  It gives us all, as Blues fans, familiar ground to stand on.  We’ve all got that similar experience.  Whether you’ve been with the Blues since ’67 or ’97, we’ve felt the same highs and been crushed by the same lows.  We’ve carried on the love of the game and passed that on to those around us.  We sit in our cars outside the arena and honk “Let’s go Blues” waiting for any one of our 19,000 closest friends to shout it back in return.  We wait for our crazy uncle, Towel Man to go nuts and count off our goals for us.  We sing and dance together as the organ plays “When the Blues Go Marching In.”  We high-five and hug the people around us when the lamp lights up.  We aren’t just a bunch of fans at the game.  We’re a family (and just as insane as any other family).

So, maybe this post wasn’t funny like most of my other posts are (or maybe it was just as unfunny as all of my other posts are).  But, sometimes I feel ways about things.  St. Louis Blues hockey is one of those things that I feel a way about.   Being a fan of the Blues is not just a hobby, or a mindset.  It’s a way of life.  And I’m damn proud to live that lifestyle.  Let’s go, Blues! 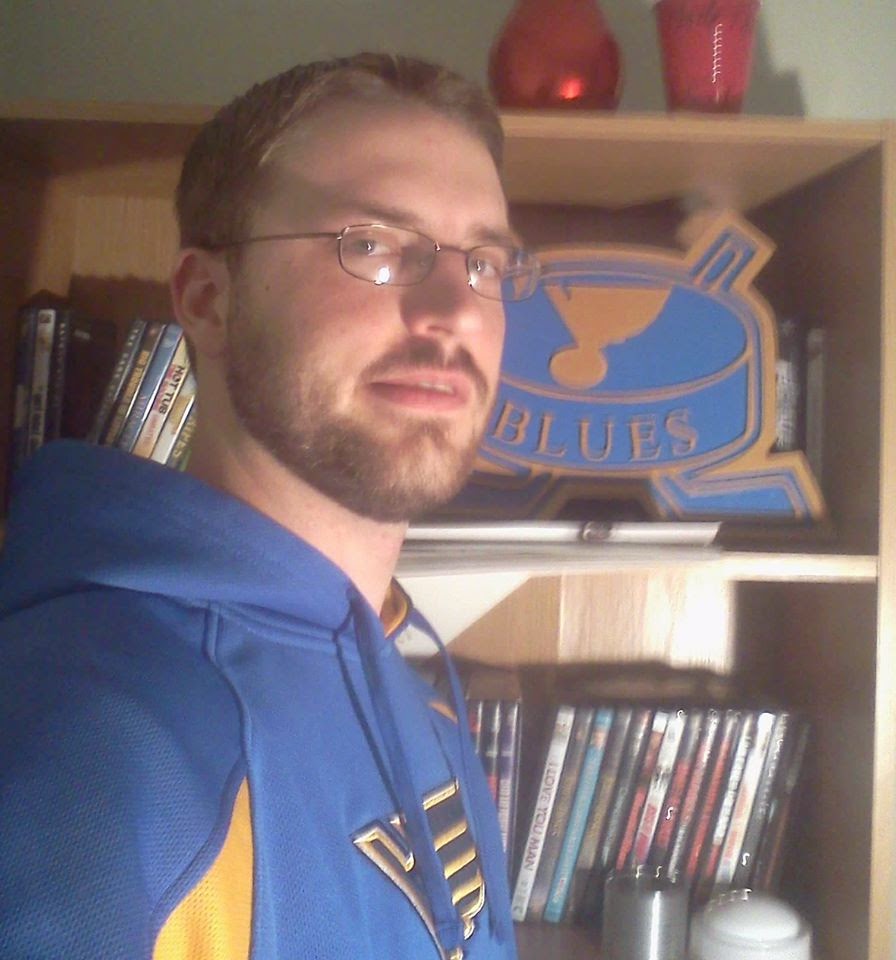