Another month gone.  After having a less-than-stellar joke-telling month last month, I followed it up with a bit of a joke-telling Renaissance this month.  And I managed to create some good visual jokes this month, too.  Thankfully, my last joke of the month had no visuals with it…

7/2
The other night while out watching a local band, one of the band members mentioned that he was a recovering alcoholic who was 5 years sober. To this, some guy in the audience shouted "You know what they say, rehab is for quitters!"
Now, I'm no stranger to controversial jokes, but the trick to telling bad jokes (which I like to think I'm a bit of an expert at) is to make sure your timing doesn't make you look like a douche-canoe.

7/3
In an unexpectedly fortunate turn of events, nobody I know is getting married during the time that I've been rehabbing my torn calf muscle. Which is great, as I'm well aware that there's no way I could resist cutting a fuckin' rug and I really don't want to have to explain to my doctor that the reason I'm not getting better is because I had to break it down to "Billie Jean."

7/4
Now that I've combined the Squatty Potty with a LumiLux motion sensor toilet light, I'm pretty sure that I have the Cadillac of shitters. Or at the very least it's that tricked out Skyline from "2 Fast 2 Furious." 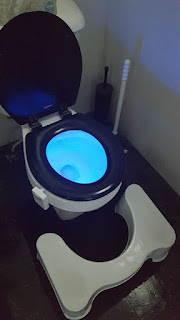 7/9
I think most antique malls should just be called Garbage Stores.

7/10
Came across this guy in a bathroom. Had to keep my guard up. 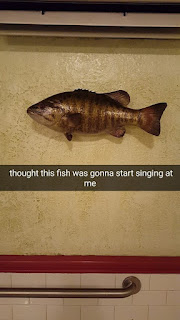 7/10
Bathrooms at public pools make me uncomfortable because the floor is always soaked and I can't be sure of the source of the suspiciously warm wetness.

7/11
While having lunch yesterday I overheard an older lady at the table next to us ask the server if his 3 children were all from the same mother and if he was married to her. The server politely responded that they were and he was, to which the lady said, "That's good, I feel very strongly about family values."
Were it me, just to fuck with her I would have said, "No they're all from different mothers. And they're all bi-racial." I think it would have been worth not getting a tip.

7/13
Yesterday at physical therapy they had me hopping on alternating feet to work out/test the strength of my calf. So I'm happy to report that I'm officially cleared to play hopscotch again.

7/14
There's a Gatorade bottle in the bathroom trash can. I feel like this can only mean that one of my roommates considers their body's fluid levels to be a zero-sum game. 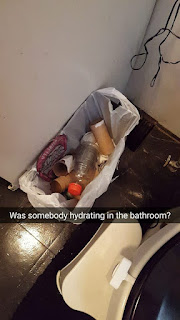 7/18
Serious question: if Donald Trump gets his transparent border wall built, exactly how many seconds will elapse before someone presses their bare ass/junk up against it? Taking wagers now.

7/19
My girlfriend insists that turkey bacon counts as real bacon. And I insist that she knock off her bullshit.

7/19
Seriously, my girlfriend prefers turkey bacon over real bacon and pancakes over waffles. It's like she thrives on disappointment.
Must be why she dates me.

7/20
I think when someone says they've decided to go vegan, what they're really saying is, "I've grown tired of having good food in my life."

7/20
Last night, I dreamt that Donald Trump narrowly avoided hitting me with a golf cart and then, angered that I didn’t thank and praise him for not hitting me, he fired me from my job. Worried about how I would make ends meet, I went down the street and was hired on the spot at Wal-Mart with no application or job description given and immediately put into orientation, which was interrupted by my (now former) boss stopping in to note that he was upholding Trump’s firing of me and to ask me to hand over the projects I was working on with a promise that my employment “would be re-evaluated when everything settles down.” This was all capped off by a realization that my new (imaginary) job training caused me to miss my (real life) appointment to get my vehicle serviced, because apparently dream-Ryan is still very concerned about real-Ryan's tire rotation.
Will be checking my apartment for a possible carbon monoxide leak.

7/21
You're basically paying for the name with these beets. 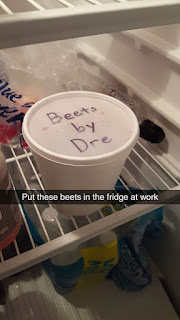 7/22
Thought for a second that these people had a pumpkin growing... 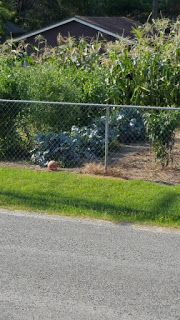 7/23
One year ago today my girlfriend and I went on our first date; and I hate to admit it, but it was to see the Ghostbusters reboot. I didn't want to see the movie but she was cute and actually talking to me so I figured, "Eh, I'm sure this isn't the only bullet I'll have to bite for this chick."

7/23
I made the mistake of taking my girlfriend's vehicle to Wal-Mart. Just spent 10 minutes aimlessly wandering around the parking lot looking for my car.

7/24
This is the gas situation literally every time I get in my girlfriend's car. Not sure how anyone can willingly live this close to the edge all the time. 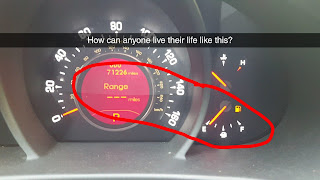 7/24
KFC gave me 2 forks with my Famous Bowl. So either they think I'm not a fatty and will be sharing with someone (wrong!), or they think I'm such a pig that I need 2 utensils so I can stuff my face faster.

7/25
Last night, after being out of commission for 7 weeks due to a torn calf muscle, I got to play hockey for the first time since my injury. Today, everything is sore except my calf. I guess that means all those weeks of physical therapy worked.

7/25
This chair placement raises a lot of questions. And makes me uncomfortable. 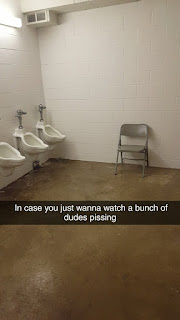 7/29
Went on a nature hike this morning after eating a questionable amount of hot wings last night. Not sure if bears shit in the woods, but found out that I do.