Holy shit, what a month!  June was far and away the best month of my life.  It featured the two best days of my life: the Blues winning the Stanley Cup and me getting married to the love of my life (in no particular order).   If you didn’t already know, I’m a huge Blues fan and you’ll see some more jokes sprinkled in there about the Blues winning and poking fun at Boston.  You’ll also see a decent break in the dates of my jokes where I was in full-on getting married mode and didn’t focus on much else besides making sure I didn’t give my bride a reason not to show up on the big day.  So, on to the jokes.

6/2
Sometimes I worry that I might be nicer to my dog than I am to my kids. But then I remember that the dog never whines at me because I won't let it watch LOL Doll videos on YouTube.

6/4
NBC just offered this live look in at Enterprise Center to update everyone on Zdeno Chara's status after last night's game. He's still on the bench. 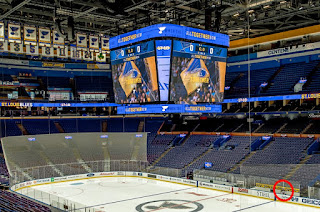 6/8
It's June 8th. The kids decided they wanted to watch How The Grinch Stole Christmas. What the hell?

6/9
I was in a parade with my son for the Boy Scouts today. During the parade I had people I knew in the crowd bring me a popsicle and a sandwich. Usually it's the people on the float giving treats to the crowd but I like my way better.

6/10
Prior to yesterday's game 6 a local newspaper accidentally jumped the gun on reporting the St. Louis Blues as the series victor. Here's an embarrassing photo of that gaffe. 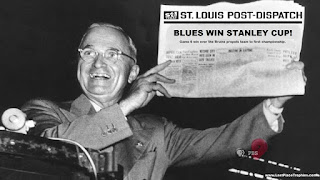 6/12
I'm getting married next Saturday. So the outcome of tonight's hockey game will determine if next Saturday is the best or 2nd best day of my life. It's worth mentioning that I've been with the Blues nearly 3 decades longer than I've been with my fiancée so this really comes down to the numbers.

6/14
Live look at how I'm handling the Blues winning the Stanley Cup.

6/17
I don't really understand why my dog goes nuts over treats but is super unenthusiastic about his regular kibble. They both taste the same to me. 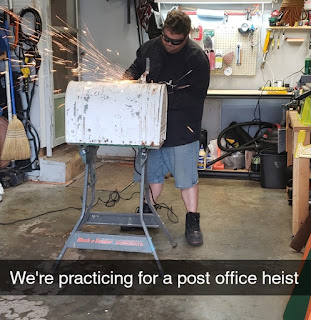 6/18
UPDATE: It has been a week since the Blues won the Stanley Cup in game 7 at Boston and Chara is STILL on the bench. Thankfully, someone left a light on for him. #PlayGloria 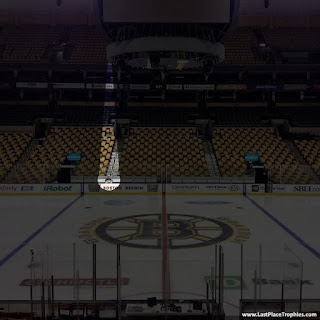 6/25
Noticed there was an empty picture frame at my dad & step mom's house so I figured I'd help out. 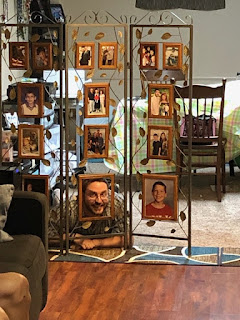 6/25
My neighbor told me that I'm glowing from the wedding. I told her it's because I spend too much time standing in front of the microwave watching my food cook.

6/27
This week I've been getting myself prepped to run my first D&D campaign and also getting ready to go on my honeymoon. Because of this overlap, in addition to a house-sitter I've opted to also set up a series of booby traps to protect my home while I'm gone.

6/27
I got the kids workbooks to do over the summer so they don't get dumb before school starts again. I assigned them a few pages to do tonight and it would appear from their reactions that I've violated the Geneva Convention.

6/29
I'm not saying that Ring Doorbell is a snitch, but it's awfully hard for me to get away with unashamedly eating an entire pizza to myself on a day home alone when my wife can watch a video of it being delivered.

That image of Chara alone in the arena with a single light on him is the most viewed/traveled joke I’ve made thus far since I started doing this whole thing, so that’s pretty neat.  Gonna be pretty hard to top, but I’ll keep trying anyways (not like I’m unacquainted with failure….look at this whole damn blog).