What happened this past month?  Well, I dove head first into a new job with much better employers, so that’s pretty neat.  I added to the pile of evidence suggesting that I’m a bumbling idiot of a husband.  I lost all patience with how absolutely stupid people are with all the conspiracy theories surrounding the pandemic.  And I entertained my entire neighborhood with my grass-cutting skills.  So here are some jokes.

Today I needed a pretty good length of coaxial cable. I went to my box of randomly assorted electronics cables that I've been keeping for years and found exactly what I needed. I'd say that's encouragement enough to never get rid of that collection. #Vindication

In regards to the pandemic, there's a lot of people who need to get back to work & socializing simply because with this extra time at home they've stumbled upon some dumb ass conspiracy theories and don't have enough brain cells to realize the things they're sharing make no sense to anyone that hasn't been eating lead paint chips.

My wife got a weird sunburn on her back and (being supportive as usual) I told her she looked like a Jamaican beer.

Old job: "Eh, you've been here for 5 years, idk if we really know enough about you to trust you to work from home."

New job: "Yo, we've known you for like an hour and you're on a 90 day temp stint? Take this computer home with you. And you should have 2 monitors for it because lol why not?"

I submitted my resumé on a job posting for a Bilingual Operations Manager. ¿Por qué no?

Every January I go to a chicken wing festival. While I've already had a handful of concerts and events I was looking forward to get canceled due to COVID, that's the big one. That's my breaking point. If America can't collectively get its shit together and deal with this pandemic by then because a sizable and woefully stupid chunk of the population has decided to politicize a virus, I'm gonna lose it and end up like a real life origin story for The Joker.

All I'm saying is if the neighbors don't want me to serenade the entire neighborhood with every ska/punk song of the 90s and 00s that I know, then they should chip in to hire someone else to mow my lawn because this is how I get shit done. Otherwise, just enjoy the show.

I finished mowing the grass and my shirt was almost completely soaked with sweat, which is still less than I sweat from dancing at every wedding I go to. Because I love to cut a fuckin' rug.

I burnt my bacon this morning because I had to step away from the kitchen to help my kids with their math workbooks. I hope they appreciate how much I sacrificed for them.

Wife: "I really wanna go to that produce stand. Do you know what the hours are? Or if it's any good?"

Me: "Do I look like someone who frequents a produce stand?"

Me: "I guess it does kinda look like I'm smuggling a watermelon under my shirt..."

If I'm being honest, this pandemic and all the conspiracy theories popping up during it have not changed my opinion of anyone. I haven't seen people that I previously considered intelligent and measured in their thinking sharing anything ridiculous that has made me disappointed in them. Really, it's just outed the people who I already suspected of being kind of stupid but who had formerly at least been wise enough to keep their mouths shut.

Netflix has been around for 22 years now. That's over 5 times as long as the Confederacy existed and without all the racism.

People should be celebrating their Netflix heritage.

When I see people constantly sharing Qanon conspiracy bullshit and routinely referring to what they're sharing as FACTUAL. 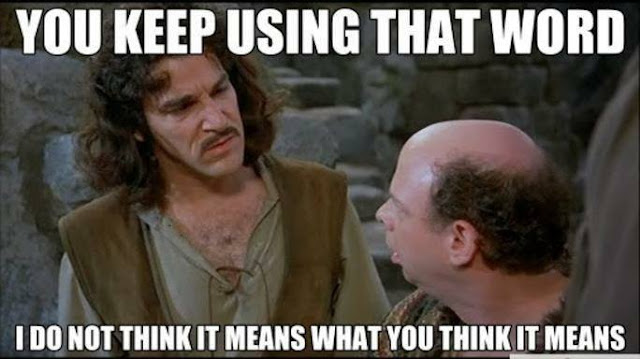 I told my kids they could get on their tablets after lunch, so Henry made himself a PB&J at 9:30 in the morning. #Schemer

Not trying to brag, but it takes some skill to skank a lawnmower around the yard. #SkaLife

Not unexpectedly, the crowd of mush-brains that believe this stuff pointed to the removal of these accounts as "proof" that the conspiracies were true, which makes me assume that they also think blood-letting and keeping the four humors in balance are still relevant medical knowledge since references to black bile have been removed as a prominent feature of medical textbooks these days.

Cashier at the grocery store: "How are you today?"

Just another in a long line of struggles with having 2 first names, I am listed in the directory at work as Rick Rick.

Literally just learned that the lyric in Semi-Charmed Life is "And the four right chords can make me cry." I always thought it was "And a four-eyed girl can make me cry." Legit thought this dude was singing about doing meth with a girl who wears glasses for my whole life.

I’m sure that I haven’t seen the last of the world screwing up my name by a longshot, but as long as it keeps giving me joke-fodder, I’m all about it.  Next month is supposed to be the return-to-schooling date and I’m sure I’ll write some jokes to keep myself from crying, so keep checking in.