July is over with and here’s the rundown of all the jokes I wrote this past month.  Couple of things worth noting, first of all, good for me for doing the bare minimum to get an actual article out this month in between this and the last joke round up.  I actually had started another article but ran into a little bit of writer’s block, which I am certain can be resolved with a little bit of alcohol.  And I’ve come full circle to the time last year when I started looking back at jokes from 2014 and earlier, so from here on out, you’ll probably not see many jokes from previous years as I’ve likely already posted all of them.  With those disclaimers out of the way, enjoy! 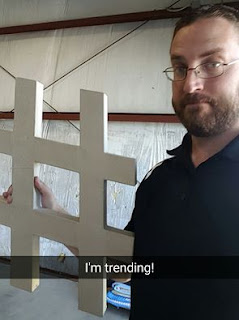 7/1/2013
I can tell it's Canada Day because all I've wanted to do today is listen to Rush and pronounce words funny.

7/2/2014
I was watching Iron Chef America and the episode was Battle Beer. Unfortunately, the chefs spent the whole competition using the beer as an ingredient in their food rather than drinking it all and attempting to cook something edible without burning down the kitchen.

7/2
I went to Waffle House the other day at 3 a.m. (I'll let you assume why) and ordered hash browns with mushrooms, ham, cheese and gravy. They screwed up my order, skipping the cheese and gravy, and instead putting chili on it. Not sure if it was an honest mistake or if the server/cook was trying to hook me up but I had to leave a few bucks extra on the tip because it was the first time I've ever had a restaurant mess up my order and actually make it better.

7/2/2014
I had to receive training for "reasonable suspicion drug testing" at work. I learned that one of the symptoms that may tip you off to an employee using cocaine is if they are "craving more cocaine." Good to know. 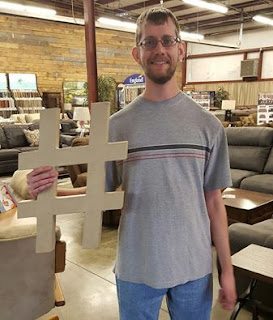 7/5
Saw a girl at the baseball game using Snapchat. I shouted, "YEAH SNAPCHAT!" then when she turned around to look at me I gave her a thumbs up. I basically have the best people skills.

7/7
Facebook is suggesting a "Christians for Trump" group to me. It's like you don't even know anything about me...

7/8
I like to think I'm a pretty tolerant guy who is really accepting of all colors, but this employee at Qdoba just gave me salsa verde when I clearly asked for salsa roja and I'm not okay with that. ‪#‎BilingualJoke

7/8
I'm just waiting for someone to make an app combining Pokemon Go and Tinder; you walk around and throw Pokeballs at people nearby that you want to hook up with and they choose to either stay in the ball or shake free. Kinda torn on whether I think this idea is brilliant or pathetic.

7/9
I bought a new pair of shoes at work today. It's a little strange to be spending money at the place I go to make money, but the really weird part is that I work in a furniture store.

7/10/2013
I like when people post statuses about weather because sometimes I worry that my house is the only one getting rain.

7/10
Brain: "Hey man, I bet that cute girl over there would be really into you if you walked up to her and said some really stupid shit."

7/10
Had a spam account message me tonight, but I made my priorities clear. 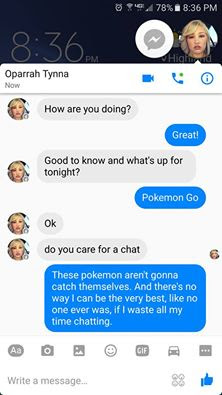 7/11/2013
I always ignore the microwave instructions that say "let food cool 1 minute before eating." If I wanted to wait 2 minutes to eat, I wouldn't have bought food that I can cook in 1 minute.

7/11/2014
I've always heard that women are attracted to guys with a sense of humor. And I think that means that I'm not very funny.

7/11
Was making my lunch for work today and made the unfortunate discovery that my bread was moldy. So now my lunch is a peanut butter and jelly sandwich on a hamburger bun. ‪#‎CalledAnAudible

7/12
UPDATE: I failed to buy a new loaf of bread yesterday, so today for lunch I'm having a turkey sandwich on a hot dog bun. It's like a tiny hoagie.

7/12
In case anyone was wondering what I'm doing with my life. 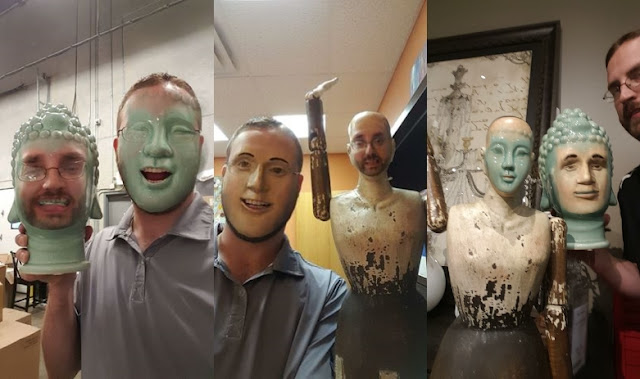 7/14
One of my favorite hobbies is watching how often people who are "so in love" break up with each other on Facebook.

7/15
Went to a concert that started at 8 pm. At 8:30 I get this message from ‪#‎Knuckles:
"Are you going tonight and what time are you getting there?"
I mean, obviously my plan was to get there before the show started...

7/15
I think Jason Mraz came to this show at The Firebird. 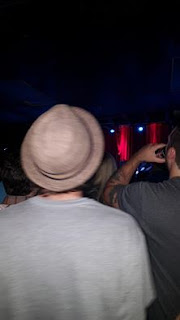 7/19
I like to use Facebook to post about the daily activities of my life in exhausting detail, then complain that other people are "in my business."

7/22
Trump vowed to bring back Law & Order, but I think if he really wanted to win over a group of passionate, single-issue voters he should have promised to bring back Firefly.

7/24
I think one of the best ways to teach children about adversity and struggle is to buy them RoseArt crayons instead of Crayola.

7/25/2012
I don't get embarrassed very easily. I think that's because there's not really anything much more embarrassing than being me on a daily basis.

7/25/2014
Partied with some cops tonight, got tased for fun. The American dream.
Also, I peed in the grass in front of the cop's cruiser before I got zapped because I was worried the shock might make me piss myself.

7/25
Lately I see a lot of people say that they like Trump because he "speaks from his heart" and I know it's been a long time since I've had an anatomy class but I'm pretty sure the heart is not located in your ass.

7/25
Trying to get in some practice time for hockey and this game of bicycle Polo is going on at the rink. Probably the first time I've ever been amongst a group of people and been certain that I'm not the lamest person there. 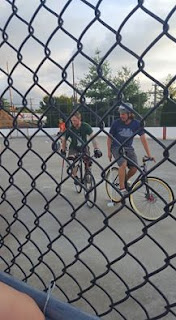 7/26
Breaking down barriers over here. 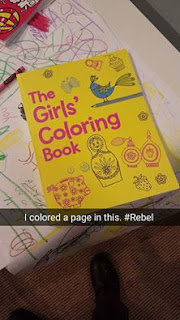 7/26
Truthfully, I don't really have a personality; I'm just a series of jokes and stories parading around as a semi-competent human.

7/27
Remember back in school when the teacher would have a discussion about the assigned reading and would call on students to give their thoughts? You could always tell which kids didn't do any of the reading and were just making shit up as they went.
That's what political arguments on the internet are like.

7/29
Today I heard a cover of "How Will I Know" by Sam Smith and it was legitimately one of the worst things I've ever heard. Come to find out, this was recorded in 2014. Why were more people not angry about this? I feel insulted on behalf of Whitney.

7/29
Realistically, I could be making out with a girl and still be thinking to myself, "Eh, I'm not really sure if she likes me or is just being nice."

7/30
I've seen a lot of pictures of people that have gone to those places where you drink wine and make a painting. It's given me a business idea that's a little more my speed; a room full of typewriters where people get smashed on whiskey and are given a writing prompt. I'll call it Hemingway's.

7/31
I heard that the county fair where I live had a lawnmower demolition derby. And while my brain knows that it was riding lawnmowers, my heart wants to believe that it was just a bunch of guys slamming push-mowers into each other.

I know I say it after every one of these, but I do still have some great stories I’m working on and maybe I’ll be a productive human being and actually finish some of them.