We’re a month deep in the new year and that means it’s time for the January Joke Round-Up.  I do believe I found my visual humor this month, lots of pictures.   I posted a new article this month to critical acclaim (2 people told me it made them laugh!).  I lost my will to live thanks to country music, pestered my dog and made an always welcome Cool Runnings reference.  If you haven’t seen them already, here are the jokes. 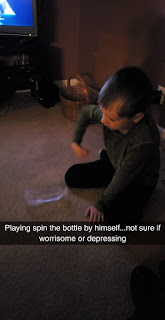 1/3
The radio at work today has been set to play Disney songs, which has mostly been fantastic. However, I am now aware of the fact that there is a country music cover of "Let It Go." And that is how I lost my will to live.

1/3
When someone is considering doing a country music cover of any song I have to imagine that the thought process is something like, "A lot of people sure like this song. What if I made a version for people who don't like good things, though?"

1/4
Since the Alexandria Ocasio-Cortez dance video surfaced, a lot of conservatives have come out seemingly opposed to dancing. I'm pretty sure I've seen this situation play out before. Looks like we gotta cut loose...

1/8
Yesterday, our dog knocked over and ate my fiancée's favorite cactus. First of all, this conclusively shows that, while cute, our dog is dumb. And secondly, while she was upset about it, we couldn't really punish the dog because eating a cactus comes with its own consequences...

1/12
Having spent the better part of the last decade living in an apartment, it's been a while since I've had to shovel a driveway. What a bunch of bullshit. And why is my driveway suddenly so much bigger once it's covered in snow. I hate everything.

1/14
Just trying to put off that awkwardness until he's a teenager. 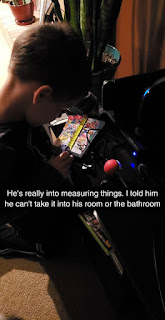 1/15
There's been a lot of talk about the fact that Trump served McDonald's to the Clemson Tigers football team, but I have seen no coverage on what should arguably be the biggest question in this whole story: was the ice cream machine out of order?

1/18
Every time I open the fridge I get confused by this damn cheese. 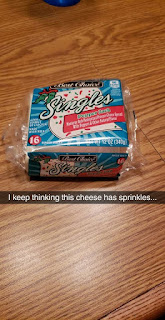 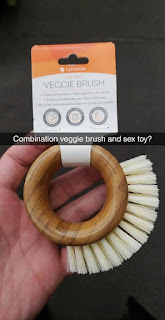 1/23
I was complaining at work this morning about the fact that a vendor contact I had reached out to the other day hadn't emailed me back yet. Turns out, the guy died like a month ago.
So I guess I'm breaking out the Ouija board.

1/23
Watching this snowman die is strangely amusing to me. Look at the head! 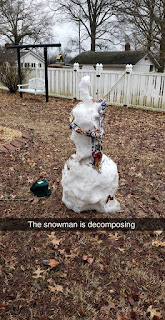 1/25
I can't wait until I'm an old man in a nursing home who can't remember a single person around me but still somehow recalls the lyrics to the song "Bangin' On A Trashcan" from that one episode of Doug. 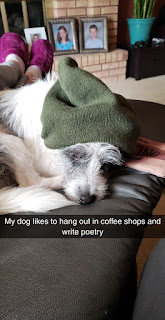 1/28
Some people (usually those that are on the receiving end of it) believe that an insult or rudeness negates any point made in an argument. That's really something I disagree with. If you stubbornly believe in something that is demonstrably false, if you refuse to acknowledge facts when faced with incontrovertible evidence that you're wrong, then I think it's fair play.
"Of course the earth isn't flat, stupid."
"Climate change is real, you ignorant prick."
"2+2=4, moron."
"Yes, slavery was the cause of the Civil War, you simpleton."
"The Holocaust was real, fuckwad."
"H2O is water, dumbass."
"Vaccines work, shitbrain."
Calling someone who believes in things that are contrary to reality a rude name doesn't negate the facts presented in the other part of the sentence, and also very importantly includes the fact that they're a dipshit for believing nonsense. Really, it's a two-fer. 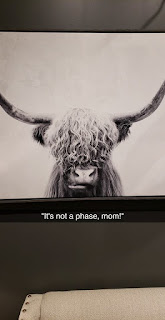 1/28
My fiancée bought me a robe the other day. It's super plush and purple and probably from the women's department but I don't really care because I've been strolling through the house like living room royalty ever since I got this amazing thing. #RegalAF

1/31
Last night I dreamt that I had a bunch of landscaping done in my back yard and in the middle of all the work, Donald Trump showed up to have a short fence built splitting my yard in half under the premise that if it kept my dog from getting from one side of the yard to the other that it was proof that a border wall would work. Usually, my dreams are kind of far-fetched but this seems really plausible as a stunt he might pull.

One cool thing about getting out a new article right off the bat in 2019 is that I have the rest of the year to disappoint everyone now.  Stay tuned.