Some months, when I’m putting together this round up I look at the jokes from the beginning of the month and am amazed that the month is over because I feel like I just wrote those jokes.  This was a long month.  I looked at what I wrote the first few days of this month and thought “Holy shit, that was still this month?”    I’m sure it has something to do with the fact that fall is miserable, torturous bullshit that seems to drag on forever and we’re now in the heart of it.  What?  You thought I wasn’t going to complain about how awful fall is?  Anyways, this month we saw the joyous return of hockey season, I found out that my daughter is way more similar to me than previously imagined, and I created a great motivational tool for my coworkers.  So, here are some jokes.

10/1
Hockey Eve is always so exciting. Everyone make sure to leave out beer and pizza for Brett Hull tonight. 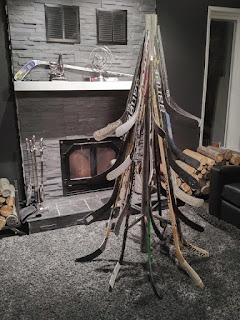 10/2
My wife was not impressed with my work attire today. But it's Hockey Day and I don't care if it's hot out there was no way that I wasn't gonna wear my Stanley Cup Champions socks. 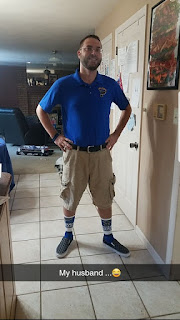 10/2
I'm bummed that the Blues didn't win their first game of the season tonight, but I've heard that it's possible to be in last place on January 3rd and still win The Cup so I think there may still be hope for them this season.

10/6
I hate that there's a line dance for Footloose because of that garbage country cover. I hate it. Line dances are a structured set of moves, which is completely against what the song is about. You just gotta feel the music. You gotta cut loose. Footloose.

10/9
Last night I had 2 different dreams about eating donuts. Even in my sleep I'm a fat kid.

10/12
This might be an indecent photo. I don't really know the pants situation for starfish. 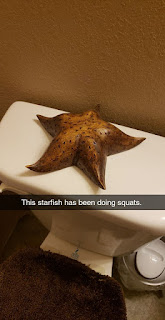 10/13
I stayed up late enough to shut down the bars last night, something that I haven't done in a long time. I was in my basement watching Netflix instead of at a bar, but I'm still proud of myself for staying awake.

10/13
The kids have a drum set that my wife got for them several years ago (presumably because she hoped to drown out the sound of passing trains). They also have a habit of getting up at an ungodly early hour every day. This morning we had to have a little talk.
Me: "There is no reason for you guys to be up playing drums early in the morning when other people are sleeping. It's really loud."
Henry: "It's okay, I put on headphones so I didn't hurt my ears."

10/14
So my daughter painted this absolute fucking nightmare. 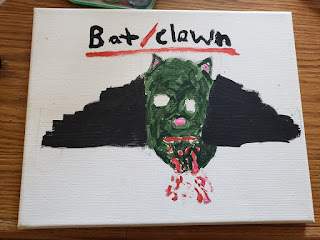 10/18
I took the day off work to chaperone my kids' school field trip and I'm pretty sure I'm more excited about it than they are. Whatever, I love field trips.

10/22
I keep hearing this song on the radio, “16” by Highly Suspect. I don’t particularly care for the song anyway, but the chorus itself seems especially ridiculous:
“It took me sixteen years to find ya
One second to love ya
Seven years to hold ya
One minute to lose ya
Oh, God
Where did I go wrong?”
Bruh, I think it’s pretty clear that one minute is where you went wrong. Why are you asking this question when the answer is so obvious?

10/22
I think that about sums up my feelings towards this poll.

10/23
I made a motivational poster for my coworkers. 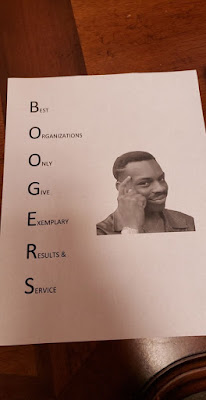 10/24
At our kids' school for parent-teacher conferences. Somebody keep an eye on this kid. 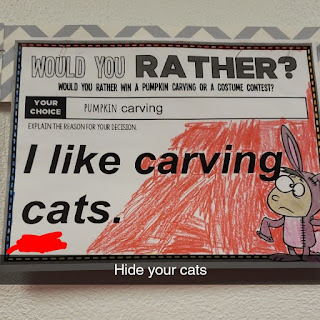 10/24
Why can't people just give their kids normal names? 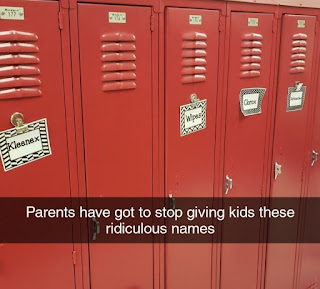 10/26
There are some parents drinking coffee before the Scout hike this morning, which tells me that there are a handful of people that really want to shit in the woods today.

10/30
I went to the pumpkin patch with my family the other day. After looking around for a bit, I picked out a nice, round, bright orange, medium-sized pumpkin. Everyone else in the family proceeded to pick out pumpkins that were twice as big as mine. Apparently I'm the only one in the house not overcompensating for something.

10/31
That is a pretty tempting offer, FB, but I would be disappointed if I didn't hit it exactly.

Well, I am not spending $10 on this because I still have school loans and a mortgage to pay, so I am absolutely certain that if you’re reading this you’re part of a much smaller group than 666 people (damn shame, too), so thanks for reading, I’ll catch you next month.