I've been to Memphis 3 times.  Since it’s only about 5 hours from where I live and has great barbecue, it seems like a no brainer for me to go there on a weekend trip.  And speaking of having no brain, let me tell you a little story of the last time I went to Memphis.

My sister (Sis), her boyfriend (D-Town) and myself were heading down to Memphis to spend the weekend there and check out the annual Memphis in May BBQ Contest.  They invited me along because I’m a lot of fun and also a well-documented third wheel.   For those of you that don’t know, in much of Missouri it is legal to consume alcohol in a vehicle as long as you’re not the one driving.  So, naturally, D-Town and I took full advantage of this while my sister drove.  We started off down the road at about 8:00 in the morning with a few breakfast sandwiches and a 6-pack of tall-boys (because you can’t drink all day if you don’t start in the morning).

The first problem we encountered was my near constant need to use the bathroom.  For those of you that don’t know: I pee frequently.   I have a tiny bladder and as soon as I feel a little discomfort, I feel obligated to relieve myself.  This issue completely flies in the face of my usual rugged manliness (take note, ladies).  So, by the time we got near the Missouri/Arkansas state line, I was feeling compelled to stop and relieve myself about every 30-45 minutes.  My sister was not happy with this.  D-town used one of these numerous pit stops to buy the two of us more beer.  And I, not being one to turn down this sort of hospitality, drank the beer and subsequently had to pee more.   Needless to say, I believe that Sis and I both agreed that we could not get to Memphis fast enough at that point.

Once we arrived in Memphis, the first thing on the agenda was to eat lunch at the famous Charlie Vergos’ Rendezvous.   D-Town and I had a couple of pitchers of beer and I proceeded to shove pork ribs into my mouth with the same level of class that you would expect from a caveman.   After getting sauce everywhere and using somewhere in the neighborhood of 5 rolls paper towels to clean up after myself, we headed out to another bar on Beale Street.  As we sat in this bar drinking enormous beers and watching the NHL playoffs (because priorities), I happened upon some random guy who said it was his birthday and then proceeded to buy me a shot (because you buy other people shots on your birthday?).  The hockey game finished up and we left to check out the BBQ competition and consume more beverages.

After wandering around the BBQ competition, it was time to head back to Beale Street for more shenanigans.  This included buying a 100oz Hurricane drink (a Memphis tradition!) and making sure to try on every hat I found in the various souvenir shops. 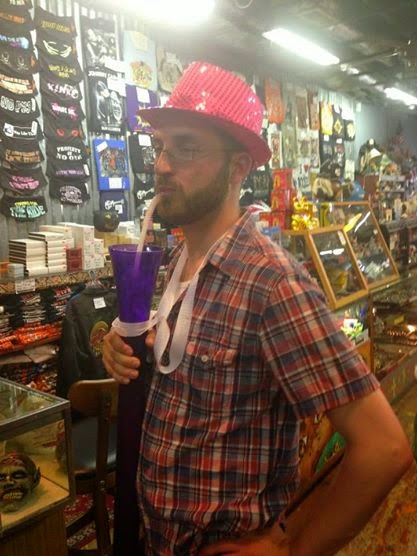 I also managed to find a solid 20 minutes to make small talk with a girl working in one of the shops who I thought was cute (I was presumably still wearing that stupid hat).  This conversation abruptly ended when I realized I had no idea where Sis and D-Town were, panicked, and ran out of the store (I’m super smooth).  After finding them and wandering around in the hot, Memphis sun for a while longer, I decided that I was in dire need of a power nap and insisted that my sister give me the car keys so that I could go recharge my batteries.   This is where the story gets extra fun, because she refused and I felt that this was an injustice, so I charged off on my own to find the car (and presumably take a nap on the ground next to it?).

The first problem that I ran into was the fact that all the intersections and sidewalks leading away from Beale Street and patrolled by police officers who make sure that nobody takes alcohol off the street.  This was a problem for me, as I still had half of my Hurricane and was in no way willing to dump it out.  I solved this problem by waiting for a distraction and using my advanced drunken ninja skills to slip past the officers.

The next problem that I encountered was trying to find the parking garage where our car was parked.  I started off entirely confident that I would be able to find it and set off in the general direction where I believed it to be.  This ultimately proved to be a terrible decision on my part because, try as I might, I could not find this damn parking garage.   I did, however, find a different parking garage.  And I managed to find this incorrect garage about 7 different times.  The first time I stumbled upon it, I thought it was the correct garage so I scoured the entire thing looking for the car before leaving.  I thought I had properly left that garage behind me, but somehow I got myself turned around and ended up right back there, 6 more times.  At one point I even went inside a building across the street, went up several stairs and across a skywalk only to end up back in the same damn parking garage.

By this point, I was extremely intoxicated, exhausted and had a pounding headache.  And upon entering the same, incorrect parking garage for what seemed like the hundredth time, my impaired brain rationalized that this was my destiny, to end up in this garage.  With this stark realization, I knew that the only thing I could do would be to make the best of it, so I walked all the way to the roof of the garage, found a corner where I thought I wouldn't be bothered and sat down with my giant Hurricane to enjoy the sunset and finally get my nap.

Let me pause for a moment and just add in that I absolutely do not advocate napping in the corner of a public parking garage in a strange city.  While I happened to get away with it, all in all it is a pretty terrible idea.  Best case scenario, you’re probably sleeping in something disgusting and worst case scenario you’ll probably get mugged and/or murdered (which both seem pretty bad).  Seriously, don’t do the things I do (even though I do make them seem REALLY cool).

About 45 minutes after I sat down for a nap, I was awakened by my phone ringing.  It was a call from Sis, panicking because she had made it to the car and I was nowhere to be found.  First, I questioned her as to how the hell she managed to find the parking garage, because it was clearly hidden from me by some sort of sorcery.  Then, I assured her I was both perfectly okay and still in possession of half of my Hurricane (my priorities were apparently different from hers).  And finally, I forced her to stay on the phone with me and guide me to whatever wormhole I needed to pass through to find the correct parking garage.

Upon arriving at the car (which I can only assume was located in Narnia), I apparently had underestimated my level of drunkenness and also how helpful that nap would be, because I took a sip of my Hurricane and flopped down into the car, ready for more sleep.  Once at the hotel, I set my Hurricane down in the bathroom (for safe-keeping) and immediately collapsed onto the bed into a useless pile of Ryan, quickly passing out.

Now, I’m not one for wasting alcohol (I was raised better than that), so as soon as I woke up the next morning I made a trip to the ice machine so I could chill what remained of my Hurricane and finish it.  To my sister, this was absurd.  To D-Town, this was awesome.  I chose to side with the latter and happily placed myself and my drink in the backseat for the long ride home (with several more pit stops).

I do not think I will be invited on any more road trips with them.