I think I’ve made it clear already that I’ve done some things that really made my dad wonder where he went wrong.  Here’s another one.

One night, my buddy LG (who you may remember from Fridge Cleaning) and I were hanging out drinking with a couple of girls that we knew (I know, it already sounds far-fetched).  This was back when I still lived at my dad’s, so we were drinking in the basement.  For the record, the basement consisted of my room, a living room area, a bar area, a workshop, a laundry room and a bathroom (pretty swanky stuff).  As per usual, we were gathered around the bar playing some card games and betting each other drinks.  One of our go-to drinking shenanigans was to have what was known as a “Silly Hat Party,” which was when we sat around drinking in some of the various ridiculous hats that I had accumulated (like a cheese head, antlers, pirate hat, etc.).  I was wearing bunny ears and LG happened to be wearing an enormous (and fashionable) sombrero. 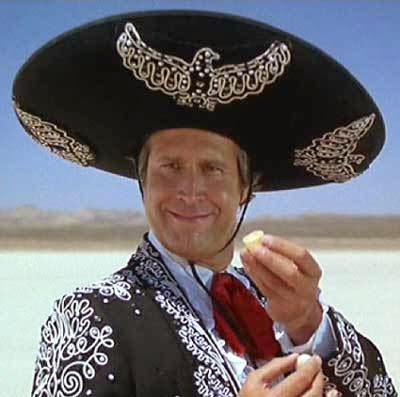 Eventually, we decided that a Silly Hat Party wasn’t bold enough, so it was suggested that we start playing strip card games.  Nobody thought this was a bad idea and more and more clothes came off as the drinks were poured.   We must have been being pretty loud and obnoxious because we managed to wake up my dad (he had to work early in the morning).  We had very little warning; we heard him as he was coming down the stairs.  The girls gathered their clothes and ran to my closet.  LG ducked behind the bar.  I managed to pull my pants up but not get them buttoned, so when my dad reached the bottom of the stairs, the only thing he saw there was me standing shirtless with my pants unbuttoned, holding a beer and wearing bunny ears.

Nothing to see here.

To some, this might be a scene where more information is not wanted, as the results could be awkward and terrifying.  My dad, however, realizing the tomfoolery that was afoot, quickly demanded to know who was in the closet.  The girls came out, surprisingly fully clothed, which actually only served to make me look even weirder.  But things didn’t end there.  My dad then demanded to know who was hiding behind the bar.  That is when LG made arguably the best decision possible as he jumped from behind the bar, still shirtless and wearing a sombrero, shouting “¡OLÉ!” with huge grin from ear to ear.

My dad went back upstairs and to this day has never questioned me about what the hell was going on that night.