Here we are at the beginning of a new month and, as such, here is another round up of my jokes for the month.  I’m sure if you try hard enough (or not at all) you’ll see a pattern in my joke-writing somewhere.

4/1
Realistically, I should use April Fool's Day to be really somber and subdued since I spend the rest of the year actively trying to not be taken seriously.

4/1
I was going to make an April Fool's joke today about me having a girlfriend, but I didn't think that was believable enough to actually trick anyone

4/2
If I have one flaw it's that I've severely underestimated my number of flaws.

4/2
If I had a bbq restaurant I would name it "Dry Rubs & Wet Meats"
Also a good name for a strip club.

4/3
There's been a bunch of joke emails being sent around the office today. In one of them somebody sent a picture of a really obese woman wearing lingerie and bunny ears with the caption "This is Ryan's girlfriend."
I replied to all saying "Don't be ridiculous, everyone knows this is the only woman in my life" followed by a picture of a hand.
Checkmate

4/4
I'm reading an article about failed product lines and one in particular sticks out to me: in 1979 Clairol released their Touch of Yogurt Shampoo, which failed in part because consumers got confused and tried to eat it, making them sick.
How does that even happen? Why were these people expecting to find snacks in the shampoo aisle? And please tell me they had the same confusion with Lemon Fresh Bleach

4/5
Since I have to work today I thought I would take some time to set up an Easter egg hunt for the office tomorrow. I didn't have any eggs so I've been hiding everyone's stapler.

4/5
I saw an article online titled "The 9 Best Times to Have Sex." Whoever wrote that article was working extra hard, because I could only think of two: daytime and nighttime.

4/6
My motivational desk picture for this week. ‪#‎ItsAllInTheReflexes 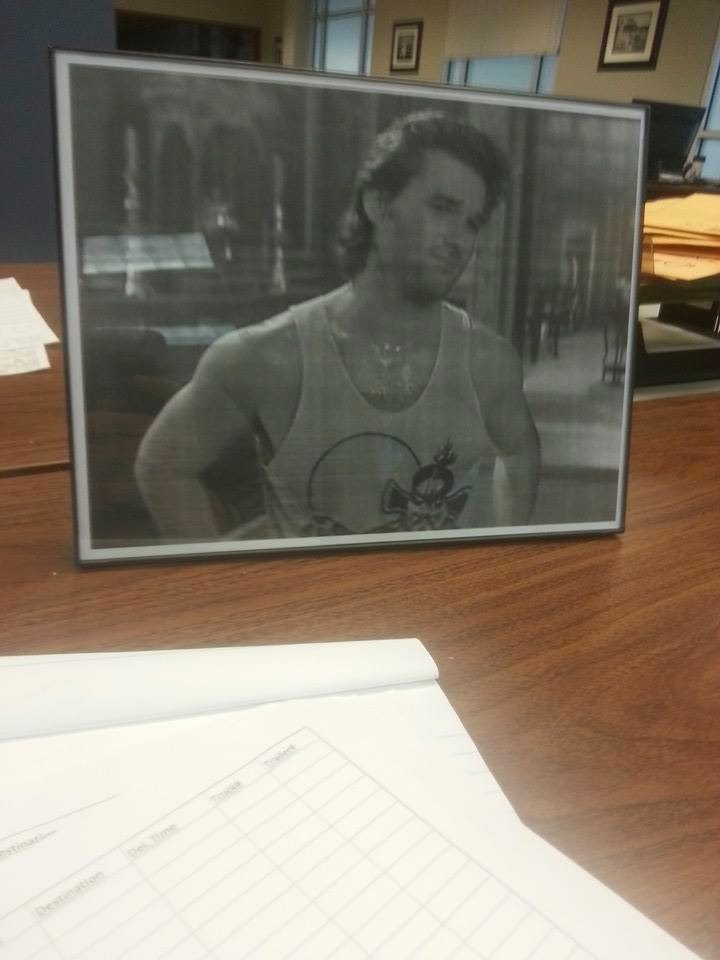 4/7
April 7th is National Beer Day. I feel like I should take today and tomorrow off work for religious reasons.

4/8
I think one of the biggest things that motivates me each day is the knowledge that there are still so many women that haven't had the chance to shoot me down yet.

4/8
I'm sitting at my desk today singing Backstreet Boys songs. I don't really care how the rest of the office feels about this because I Want It That Way.

4/9
I don't think my windshield wipers are fast enough. They have a "downpour" setting but I needed them to be on "deluge" speed this morning.

4/9
Why is drinking wine and having wine-themed decorations all over your house classy, but when I drink whiskey in my apartment full of beer signs I'm a drunk?

4/10
Pajama days at work/school must be really awkward for people that sleep naked.

4/10
A buddy and I got a motel room near this bar so we can go out drinking tonightwith friends and not worry about driving home (we're responsible). The lock onour door broke, trapping myself and the front desk clerk in the room and mybuddy in the hall. We called the fire department but my friend kicked down thedoor before they arrived. Got a new room and wasn't charged for destroying thedoor. This is real life.

4/11
I successfully made it out of my room and to work this morning. It's fortunate because there's no way anyone would have believed that I was late to work because I was locked in my hotel room.

4/11
This is what the "popcorn" button on the break room microwave does. Lesson learned. 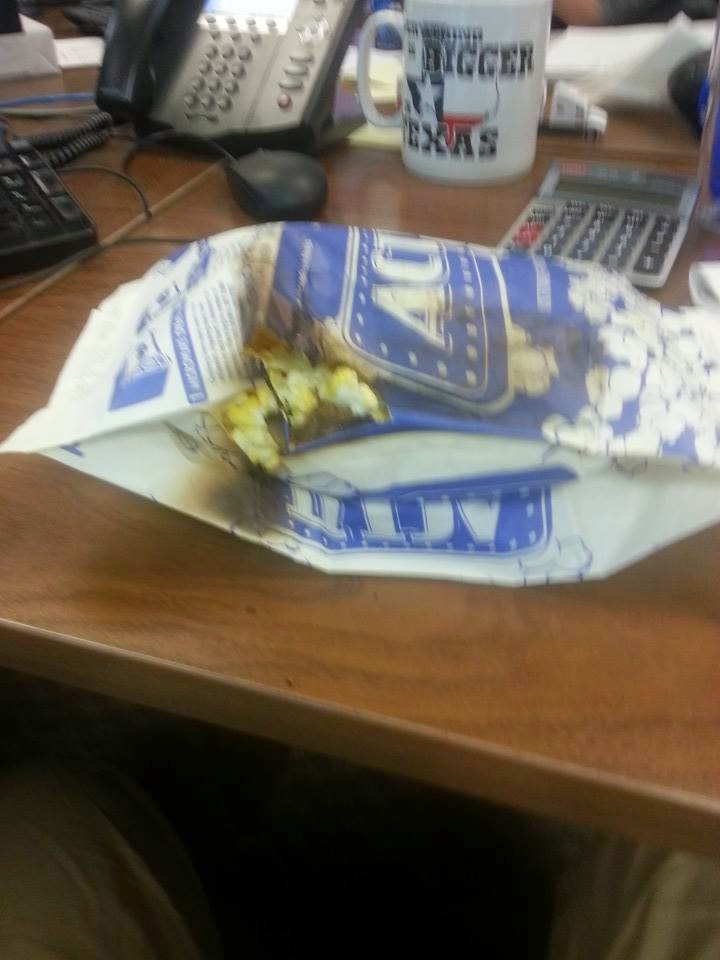 4/13
This week's desk picture is to help me find balance. ‪#‎WaxOnWaxOff ‪#‎Banzai 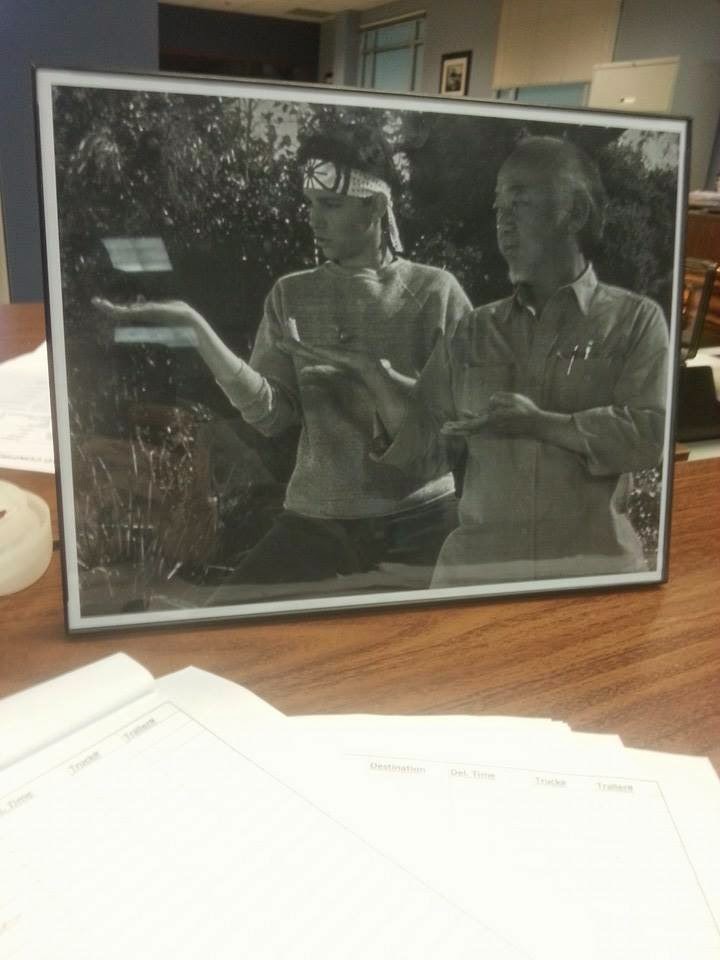 4/15
Last night I had a dream that I was in a trivia contest and doing really well at it.
Now that I'm awake, I'm not sure if I was actually getting the questions right or if my sub-conscious was just like "Eh, screw it. He needs a win to build up his self-esteem."

4/17
I had one of my customers send me an email this morning addressing me as "Ryan and Rick." I'm considering responding to him twice and just signing my emails with different names

4/17
I play volleyball with a group of people from work, and every week I send out a fake sports report to the office about our games. Last night our team played a team named Poop. So today's sports report that I sent out was just an unapologetic string of poop jokes. I'm an adult.

4/18
I bought flowers online once like over a year ago. And now I keep getting emails from 1-800-FLOWERS reminding me that I have nobody to send flowers to.
"Hey, you haven't sent any flowers in a while!"
"Thanks, assholes. I know."

4/18
I have upped my desk accessory game to a 2nd picture now. 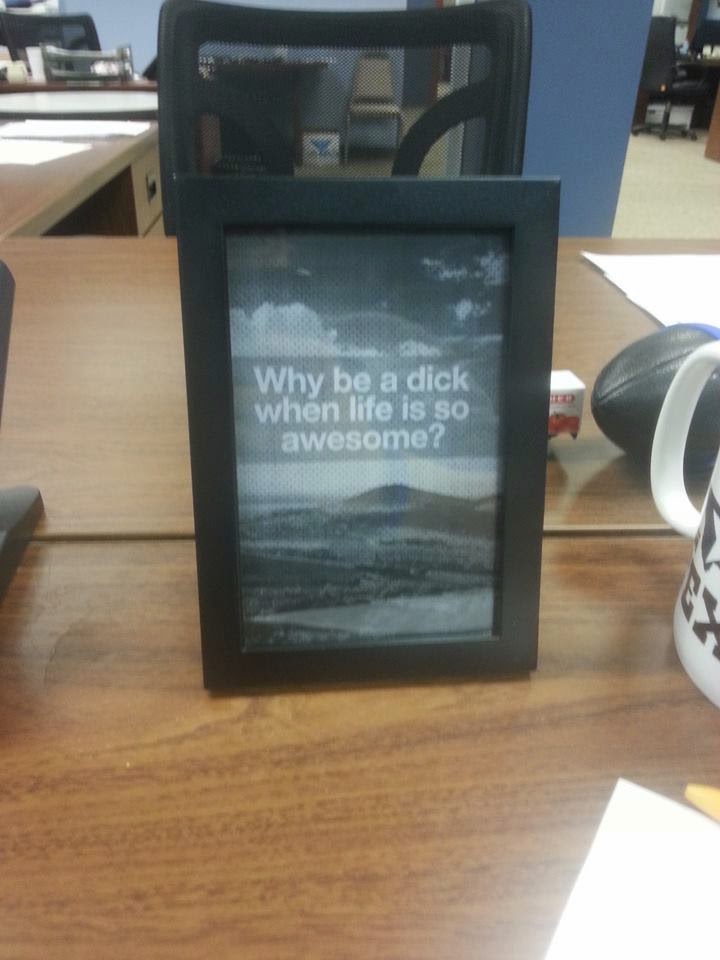 4/18
I woke up this morning to the sound of my microwave beeping; alerting that food had been left in it after the timer went off. I opened it up and found a cold bag of popcorn that my roommate had made the night before and forgotten about. He does not have a long enough attention span to wait two and a half minutes for popcorn. ‪#‎Knuckles

4/19
Today is my first day off after working 27 consecutive days. Not sure what I'll do with my free time yet, but it will probably not involve pants.

4/20
My desk picture this week reminds me of the importance of teamwork, good leadership and soft hands. ‪#‎ConcentrationNotStrength ‪#‎DucksFlyTogether 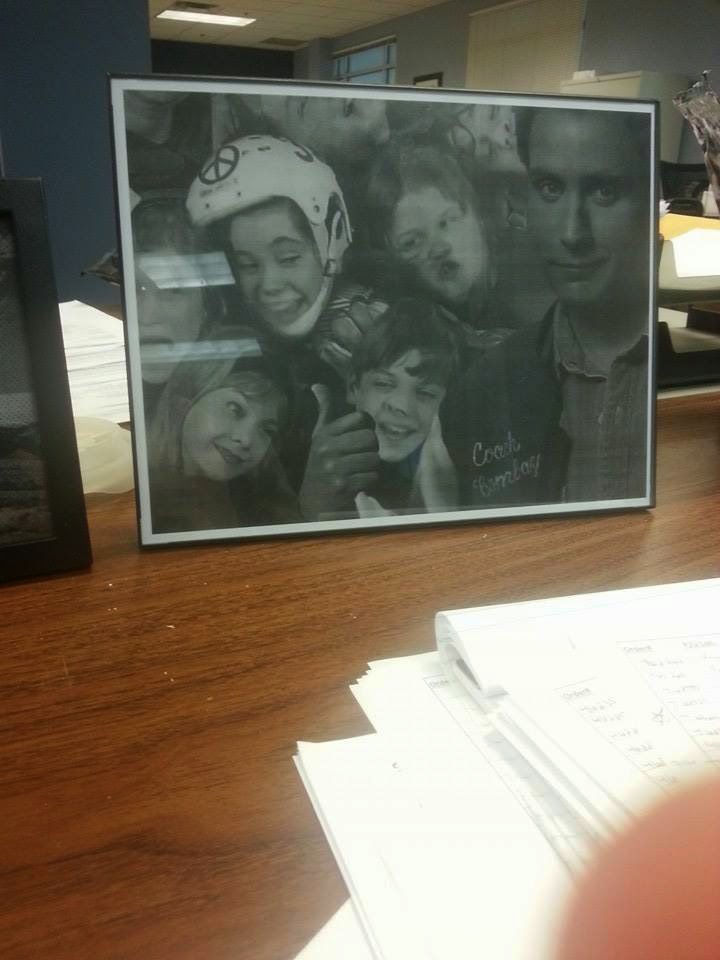 4/21
My office is having a Biggest Loser competition. I am kind of worried that I will be named the winner and it will have nothing to do with my weight.

4/21
A group of students at a Pennsylvania high school had an "Anti-Gay Day" where they all wore matching flannel shirts and hung hateful posters on other students' lockers.
But really, wearing matching outfits and decorating lockers seems kinda gay....

4/22
I made this motivational poster today. I like it. 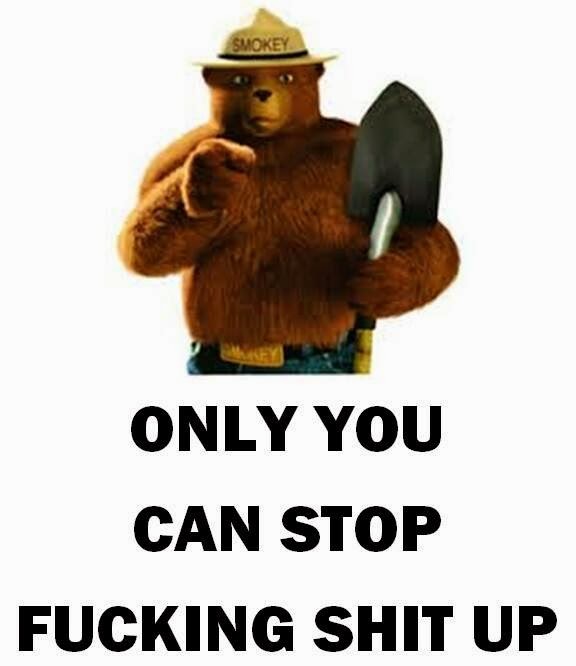 4/25
In all seriousness, plan ahead. Don't be the guy who poops at the bar.

4/25
Kyle: "Do you ever wonder if giraffes are more susceptible to lightning strikes because they're so tall?"
Me: "Sometimes I wonder why we're friends.

4/25
I don't know if anything in life has ever made me more depressed than watching people line dance to Footloose.

4/27
My desk picture this week reminds me that when you're feeling overwhelmed you just gotta dig deep, turn your hat around and go ‪#‎OverTheTop 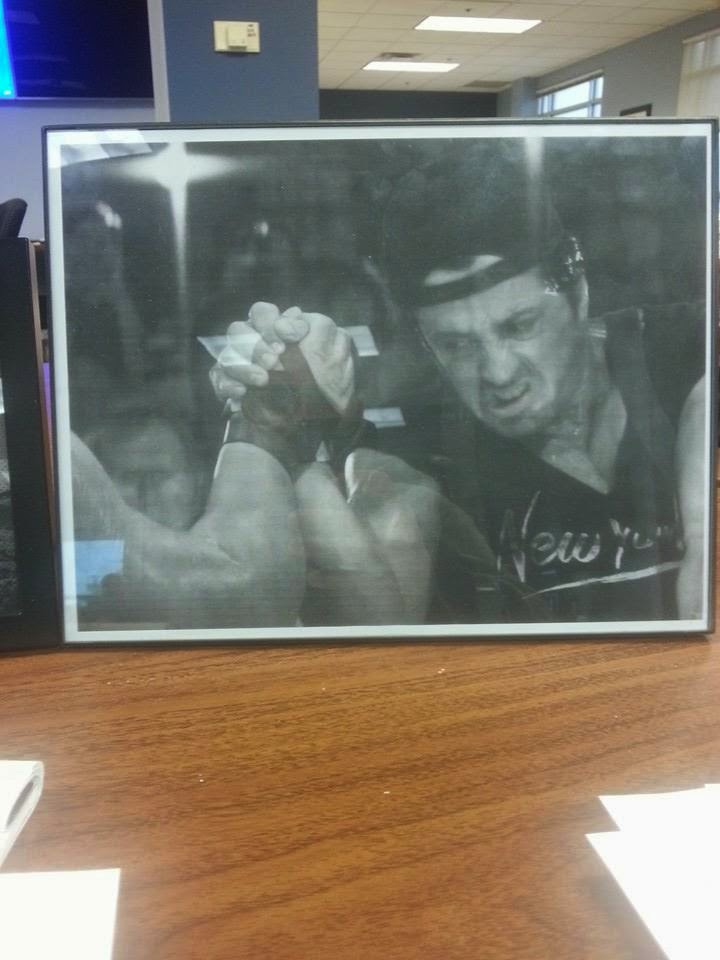 4/30
Some people get way too excited about letting everyone on Facebook know where they are and what they're doing. Sometimes it's okay not to share your entire life with the internet.
"Working for that money! - at Work"
"Hitting up that dollar menu! - at McDonald's"
"Washing my sheets because I wet the bed again! - at Shady Laundromat"
"Visiting my parole officer! - at Probably Not The Lowest Point Of My Life"

4/30
If at any point in my life somebody could teach me to use chopsticks I would be extremely grateful because I'm probably going to poke my eye out.
Also, because I just want to have an experience like in the movies where people stay late at work eating Chinese takeout with a side of sexual tension.