I have my fair share of stories about me being stupid and irresponsible (and all the fun that results from that), but sometimes even when you make the effort to make good decisions, life finds a way to make things interesting for you.

Last Friday a bunch of people from my office were getting together for a night out at a bar nearby (my office has a reputation for being spirited drinkers).  One of my coworkers (we’ll call him Patrick because that’s his name) and I both had to work Saturday morning so we decided to get a motel room near the bar so we could fully enjoy the party and not have to worry about driving drunk or getting up extra early to make it to work on time (we’re responsible).    There were 3 places within walking distance of the bar, but we went with Motel 6 because it was the cheapest and we needed to save money for all the alcohol we would be purchasing (life is about choices).

We left work, checked into our room and did some last minute preparations like putting on deodorant and brushing our teeth (it’s important not to smell bad when you’re going out in public).  We walked out of the room on our way to the bar, but that was when Patrick noticed that the lock on our door was not working.  No matter how many times we pulled the door tightly shut, the electronic lock would not engage; meaning that anyone could just let themselves into our room and rifle through our stuff (not that I had anything important, but I still didn’t want people swiping my socks and Gatorade).  This non-functioning door lock was clearly unacceptable, so Patrick went down to the front desk to retrieve the desk clerk while I stayed at the room simultaneously guarding our belongings and fiddling with the door.

Patrick and the desk clerk arrived back at the room and the clerk (we will refer to her as Clerk) immediately went to work trying various unsuccessful things to make the lock work.  Patrick stayed in the hallway; I stayed in the room with Clerk and every couple of minutes she would ask Patrick to try opening the door to see if the lock had caught.  At one point she flipped the deadbolt back and forth; that was when disaster struck.  The deadbolt broke in the locked position, trapping Clerk and I in the room.  We both tried unsuccessfully to budge the deadbolt, but it was to no avail.  I then began looking around the room for any tools I could find to possibly remove the door from its hinges.  All I could find was a plastic pen and the hotel coat-hanger (while I can be pretty resourceful, I could not find a way to use these items to MacGyver my way out of the room).   Clerk was now running back and forth between the (3rd floor) window, where she was yelling down to confused customers that she can’t check them in because she is trapped, and the door, where she is seeing me be completely useless at getting this door open.

Now Clerk decides to call in some backup and she calls up who I can only assume was some kind of maintenance person for this particular Motel 6.   Whoever he was, he gave us possibly the most worthless advice I’d ever heard.  This man, in absolute sincerity, explained that we needed to turn the door handle and then pull on the door.  “No shit, man.  I understand how doors work….”   When he realized that all regular means of opening doors had failed and he was in over his head, he suggested that Clerk call the fire department so they could come free us from the room.  What followed was, in my opinion, probably one of the more confusing and embarrassing 911 calls to have happened, at least to that department (caps lock to emphasize the hysteria in her voice).

As soon as Clerk got off the phone Patrick offered a helpful suggestion from the other side of the door, “I could probably kick down the door.  But I don’t want your credit card to be charged for the damage.”   Clerk was extremely supportive of this action, declaring that she wouldn’t charge us as long as we were freed from the room.   In fact, I believe her exact words were, “I WON’T CHARGE YOU, JUST GET US OUT!!”At this point, I think it’s worth giving you an idea of what Patrick looks like.  If you know cartoons at all, he’s basically looks like Joe from Family Guy without the wheelchair.  Or maybe Johnny Bravo’s body with Doug Funnie’s head. 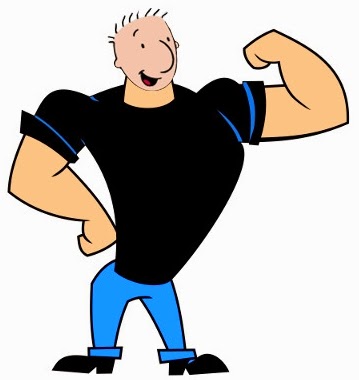 Seriously, this is pretty accurate.

Clerk’s approval was all that was needed; Patrick started kicking the absolute hell out of the door.  I don’t know if you’ve ever been near someone kicking down a door, but there are two things you should know: it is not as easy as the movies make it look and it is exactly as loud as you would expect it to be.   This door was pretty tough.  Patrick laid into it with full force numerous times and finally somewhere between kick numbers 15 and 20 the door gave way; freeing me and Clerk.  At various points in his kicking I wanted to get up close to the door and check to see if he’d loosened up the deadbolt enough to open the door, but I had a very real fear of him kicking the door open into my face and I didn’t want to end up spending the night in the hospital instead of the bar. I think it’s also worth mentioning that, according to Patrick, at no point did any other guests show up to see what the hell all the noise was or why there was some guy kicking the shit out of the door to this room.

Clerk ran out of the room and told us to meet her downstairs so she could get us checked into a different room.  Patrick and I gathered up our belongings and went downstairs.   As we were waiting at the front desk, three firefighters walked in and I was more than happy to inform them, “It’s cool, guys.  We’re free.  We just kicked down the door while we were waiting for you.  Hope that’s alright.”  They were okay with it, chit-chatted with us for a bit and offered Patrick a job as a firefighter due to his door-kicking skills.  We moved our stuff into a new room, made sure this one had a working lock and walked over to the bar to regale our co-workers with the tale of the adventure we’d just had.

After this fiasco finally came to an end, I checked my phone and realized that I had a missed call and several missed text messages from my friend Melissa, all of them finding new and creative ways of calling me an asshole for not being at the bar with everyone else already.  Once I explained why it took so long for me to meet up with everyone, it was conceded that I wasn't actually an asshole.  To be fair, I’m glad that the lock broke on our way to the bar instead of on the way to work in the morning as absolutely nobody would have believed that we were late for work because we were trapped in a hotel room.

Motel 6 also sent me a survey asking how I enjoyed my stay.  I responded with, “The lock on my door broke.  I had to call the fire department and break down the door to get out of my room.”  I hope they respond to my survey.