Hopefully you made it through yesterday’s post with all of the (awful) jokes I wrote throughout the month of January.  Here’s a whole new post for a whole other month, February.  In case you can’t tell, the first couple of jokes were written during the Super Bowl.  And things don’t get much better from there.  Enjoy!

2/1
This song about being addicted to heroin is my new favorite thing ever.

2/1
Now that the game is over we can all reflect on the depressing commercials from tonight and cry ourselves to sleep.

2/2
I've seen/heard some people who are bragging about the fact that they didn't watch the Superbowl. And really, every time there's something big in popular culture, there are those who seem to think that avoiding it somehow makes them better than everyone else. I wonder what it's like to live that far up your own ass

2/3
Through some horrifying combination of laziness and dementia, my roommate will routinely leave dirty dishes in the sink until he forgets that they're his. He then argues about why I'm forcing him to wash "someone else's" dishes. I am living in a sitcom. ‪#‎Knuckles

2/5
I went to Qdoba and ordered a burrito bowl, then watched as they made me a regular burrito and just set it in a bowl. I'm still not really sure which one of us misinterpreted what I was ordering

2/6
My sister asked me to help taste test cakes for her wedding. I'm not sure if that's her saying "You have a refined palette and I trust your opinion" or "I know you're a fat kid; have some cake."

2/8
Whenever there are nice days like today I always feel like I need to make the most of it and do something outside. But then I remember that I'm only halfway through the Xbox game I'm playing and that I still have shows to catch up with on Netflix. And I'm not the kind of person to just ignore those responsibilities.

2/9
A couple of weeks ago I mentioned that I'm changing job titles at work and won't have a desk again until some office renovations are done. This is my current work space. I put up a framed picture of an actual desk to remind myself of better days. And yes, that is Darkwing Duck as the background on my computer. 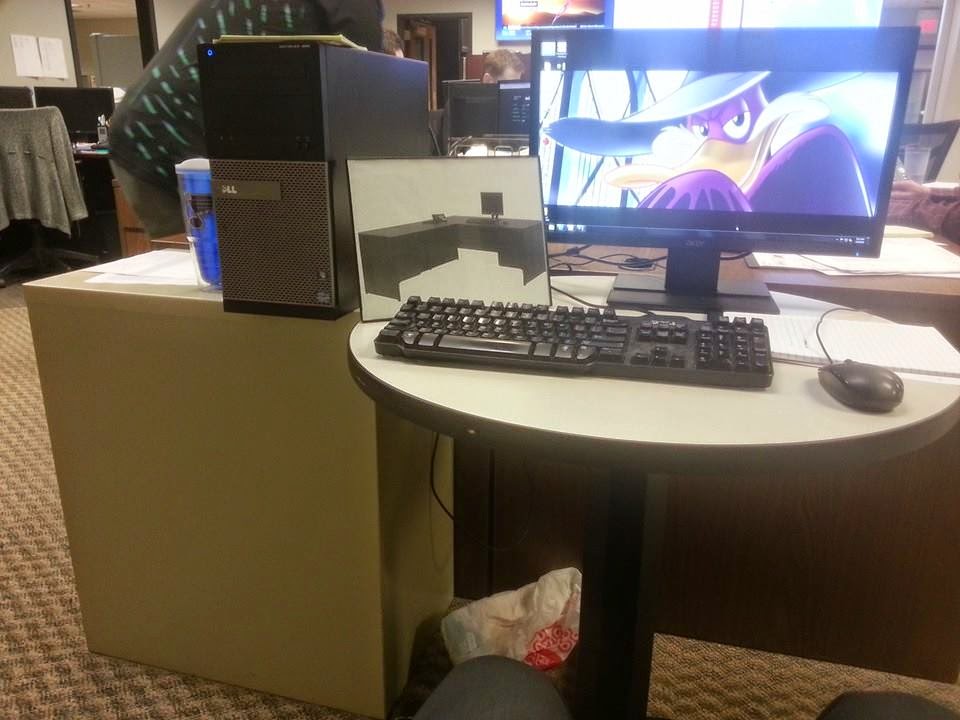 2/11
With the news that John Stewart is leaving The Daily Show, I think we can all agree that I am the obvious choice to take over for him.

2/13
I was going to decorate a shoebox and set it next to my computer at work today, but I was worried it might cause some jealousy when people saw how many more Valentines I got than everyone else in the office.

2/17
I've been trying to celebrate Fat Tuesday today. Unfortunately, I have recently been told that drinking at my desk, baring my chest and throwing beads at my co-workers is "not conducive to a professional work environment."

2/18
I bought a new battery for my phone. Now I'll be sure to have plenty of battery life for when the ladies don't return my calls & texts.

2/18
I ate a chicken & bacon wrap for lunch. And I'm making a steak for dinner. I'm trying to eat as many barnyard animals as possible in one day.

2/19
I usually try to avoid eating food with onions just in case anyone wants to make out with me. So far, this has not been an issue.

2/19
I tried to go to the bathroom at this bar. There are 3 doors. They are marked Gentlemen, Ladies and Restrooms.

2/20
My 10 year class reunion is coming up this year. I'm looking forward to showing everyone what I've accomplished since high school: I grew a beard

2/23
Saturday night my roommate tried to text his mom specifically to tell her that he wasn't drunk. When asked why he was doing it, he said "Because she always assumes that I'm drunk on Saturdays." He eventually gave up on the text because he was too drunk to spell words. ‪#‎Knuckles

2/24
I wanted an inspirational picture for my desktop background at work but couldn't find anything I really liked. I made this one. I'm professional. 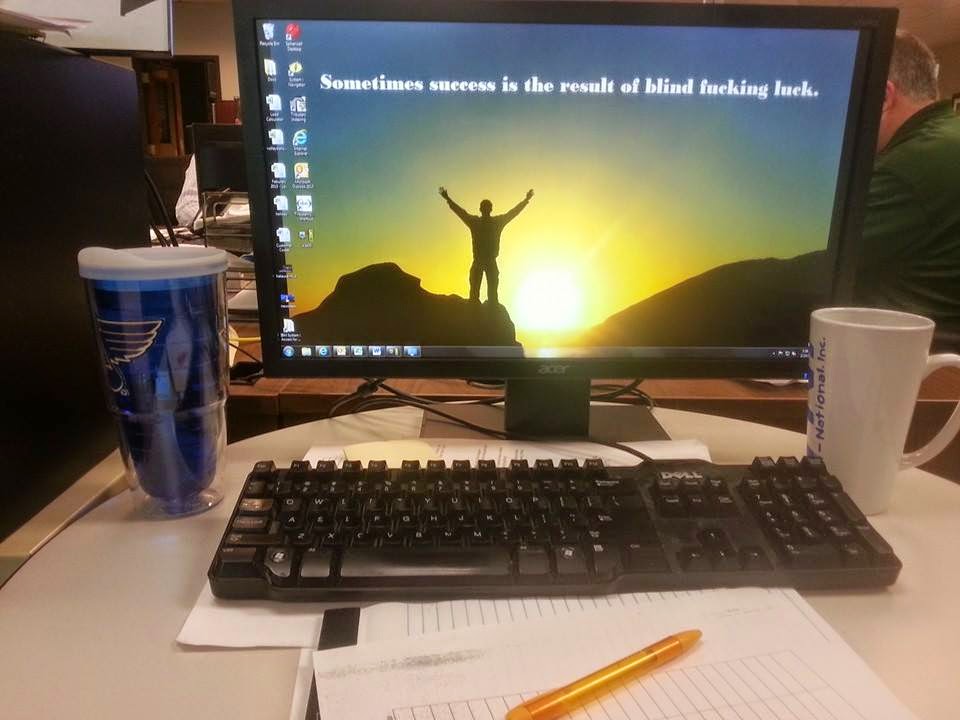 2/24
I think The Bachelor could see a ratings boost if they built a season around me. People would definitely tune in to watch all 25 women trying their hardest to get eliminated each week.

2/25
It's interesting that people you find really cool, fun and likeable in person can go home, log into Facebook and turn into loudmouth bigots, pretentious assholes and blithering idiots

2/28
I safely made the drive home from work. Then I stood on top of my car and sang We Are The Champions as snow fell around me. I'm majestic

March is up tomorrow and then I’ll have done enough work for this week.  You probably aren’t even reading this now.