I mentioned in my last post that I wanted to start doing a round-up of all of my jokes that I write each month and post them here for posterity (and for easy updates).  I figured it would be a quick post to make and I could probably squeeze January-March into one update before starting to compile my ones for this month.  Boy was I fucking wrong.  I severely underestimated the number of jokes that I’d written and posted in that time span.  What’s even more surprising is that a couple of them are even funny.  Because I had so much material to work with, you are going to get 3 updates over the next 3 days to get caught up on this (that’s more work than I’ve ever done before, ever).  So, let’s start from the top with January.

1/2
In all seriousness, if you don't love the movie Cool Runnings then there's no place for you in my life.

1/2
Two days ago I was at work. Yesterday I was off. Today I'm at work. Tomorrow I'm off.
I'm gonna be honest, I have no idea what day of the week it is.

1/5
It's always nice when, instead of winding down for bed, your brain just keeps reminding you how shitty you'll feel in the morning.
"If you fall asleep right now, you'll get 4 hours and 37 minutes of sleep for work tomorrow. Nah, just kidding, you're wide awake."

1/6
I don't feel like I need to explain why I was singing Taylor Swift's "Shake It Off" in the men's room at work this morning.

1/8
As some may remember, my beer pong table met its end at my Christmas party this past year.
So, I bought a new beer pong table and had it delivered to my dad's house, because sometimes I like to send him reminders that I still don't have my shit together

1/9
I'm eating a Lunchable for breakfast because I refuse to let society's rules dictate my life.

1/9
Not sure what everyone else is doing with their Friday night, but we got this going on. 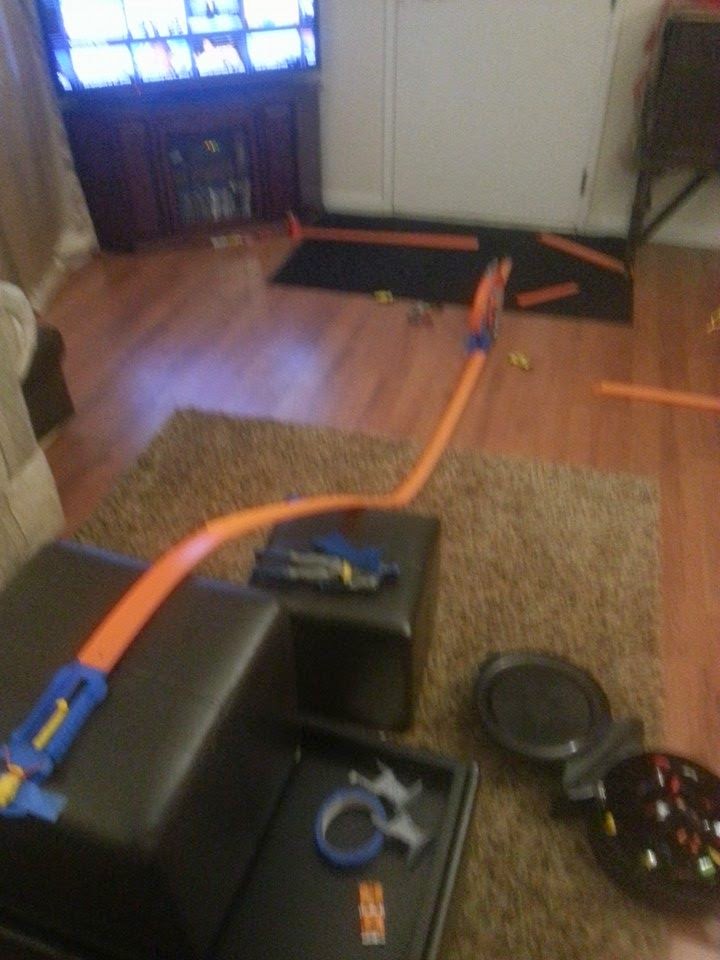 1/12
I'm responsible for training the next new fleet manager at work. I can't tell if it's because the company wants me to pass on my daily shenanigans to increase office morale or if it's because they think this will keep me busy enough that I won't have time to goof off.

1/12
Note: Do not be the guy at hockey who wears his cup on his face and pretends he's Bane in "The Dark Knight Rises."

1/13
Gas is cheaper than milk now. This has a significant impact on my breakfast cereal.

1/14
I'm kind of in the "Snooze Button" period of my life, where I should really get up and get my shit together but I'm comfortable and 5 more minutes probably won't hurt

1/14
A lot of people say they can't make it through their work day without coffee. Most days I feel like hard liquor would help more than coffee.

1/15
There's a famous quote that says "Shoot for the moon, even if you miss you'll land among the stars." That kind of thinking just leads to disappointment. I prefer to aim low and be pleasantly surprised by minimal success

1/15
A lot of my humor is self-deprecating. But sometimes I write so many jokes in one day that I have to refrain from sharing all of them because I don't want people to think that I have a personality disorder

1/16
This year Valentine's Day falls on Mardi Gras weekend, so no matter what your plans are for February 14th you're pretty much guaranteed to end the day drunkenly crying on the floor.

1/16
Every time I type a # on my phone, the 2 suggestions that come up are ‪#‎Knuckles and ‪#‎ButtStuff

1/16
Coworker: "I'm sure plenty of girls would think you're a catch."
Me: "Just because you're a catch doesn't mean you're a keeper. Lots of fish get thrown back."

1/16
The Book Of Mormon musical was fantastic. However, I still have no interest in reading the actual book

1/17
Women call me The Weatherman because I always tell them to expect 3-5 inches.

1/19
It's funny how once you dislike someone, you can pretty much justify being angry at them for anything. "Yeah, he just gave me $50. What an asshole, flaunting his money like that."

1/19
There was a guy in the bathroom at work conducting a business phone call. He was also making no effort to hide the fact that he was on the toilet as he was loudly grunting, wiping and flushing during the call. I will never in my life have that level of confidence.

1/20
Sometimes you forget to put on deodorant in the morning. Then, you get nervous about your lack of deodorant and start sweating profusely, ensuring that everyone else is also aware that you forgot deodorant. Life is cruel.

1/21
Today is National Hugging Day, or as I prefer to call it "National Get Lectured By HR For Inappropriate Contact In The Office Day"

1/21
Since I've been away from my desk training a new fleet manager, I haven't been able to use the messaging program on my computer to talk to other people in the office. As such, I've spent my work days passing notes like back in grade school. I just hope my boss doesn't catch me and read my notes out loud in front of the whole office

1/21
There are a lot of people selling girl scout cookies right now, but all the cookies seem weird. I would probably buy some if they sold Chips Ahoy or Oreos.

1/22
I take pride in telling people that I'm the captain of my hockey team. I don't generally mention that the only reason I'm captain is because I was the first one to sign up.

1/24
Driving to work this morning I had to swerve to avoid hitting what I thought was a small animal in the road. It turned out to be an eggplant.

1/26
Me: "I'm awesome!"
Coworker: "You're like the only person I know who just sits there and compliments himself."
Me: "I know a lot about self gratification..."
I'm basically just an HR violation waiting to happen

1/26
Sometimes I send out resumes for jobs that I am in no way qualified for, like CEO of Kraft Foods, because I think it's important to always be familiar with the feeling of rejection.

1/27
Düdders and I are gonna make sandwiches and drink bleach. There will be Claussen pickles and Lemon Fresh Clorox, because we enjoy the finer things in life.

1/27
I'll be changing job positions at work soon. Unfortunately, until some office renovations are completed I won't really have a desk or work space. My boss has suggested I build one out of milk crates and buckets. I am trying to negotiate for a tv tray.

1/27
I plan on only working until someone decides to start handing me big bags of money just for being handsome and hilarious.
I'm going to die in this office

1/27
Sitting here in my apartment watching Netflix, eating mini tacos, ice cream and beer for dinner. Because at a certain point you stop even trying to pretend like you've got your life together.

1/28
I think I should buy a pink dress shirt and wear it to work every Wednesday.

1/28
My side-project at work today was to question my coworkers on the perceived pros and cons of pooping at work, then create this very professional list. Helping people explore their comfort zones every day.

1/29
I once asked a girl out on a date and then waited like a day and a half for her to respond with a rejection. In retrospect, I wish I would have mailed her a letter asking her out so at least there would be an excuse for waiting so long to get shot down.

1/30
A lot of women seem to like the rolled-sleeves look on guys. I can only assume that this means they enjoy forearm cleavage.