So, I’m a liar.  I said that Part 4 was the last update to my Shameful Strip Club Stories, but here I am doing another one.  That’s good for you though, right?  This is a bonus!  And it’s short, too, so that’s easy reading for you!  Really, this one isn’t even so much a story so much as it is a bit of friendly advice based on personal experience.  I’m not going to bother with a set up for this one.  You already know the setting (a strip club) and that alcohol is involved.

Sometimes, when you’re out and about imbibing adult beverages your common sense takes a bit of a nose dive; along with your motor skills, vision and overall sense of decency.  And small mistakes happen.  For instance, you may accidentally attempt to buy a round of drinks with your Kohl’s card instead of your credit card.  No big deal, everyone gets a chuckle out of that situation, while you politely pull out a card that can actually purchase alcohol in this establishment.

However, you must not try to recreate that situation at a later time with a different audience, because they may not find it as funny as the first time around.  More specifically, if you find yourself in a strip club, do not, under any circumstances attempt to tip one of the dancers by slipping some Kohl’s Cash into her G-string.  You might think it’s funny, but she will probably think you’re an asshole or an idiot or both.    There is also a good chance that she will get pissed off by this, ultimately resulting in you being told politely, but firmly that you need to leave.  And all of this, in turn, can potentially end up with you having to stand outside by yourself sobering up in a cold, dark parking lot because you rode there with someone else who is still inside making their own bad decisions.

I know what you’re thinking.  You’re thinking that none of this makes sense because Kohl’s Cash spends just like regular money and there is no reason to get offended when she could easily just use it to purchase some of the fine items for sale at her nearest Kohl’s.  I don’t think it makes any sense either, but that is the cruel world we live in.   And it's even more insulting when, despite it apparently upsetting her, she keeps it anyways.  So you could end up kicked out and short $10 Kohl’s Cash. 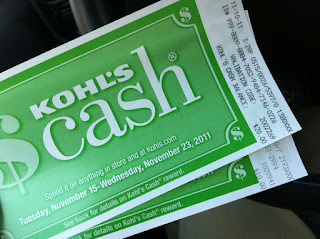