It’s time for me to make a(nother?) post about relationships and some of the inherent struggles within.  I’m sure some of you out there are saying, “Ryan, you are arguably the least qualified person in the world to make any statements on relationships because you have historically been an absolute failure at them and an awful, lonely sad sack.”  To that, I say, “This is my blog and I will do what I want, but words can hurt too and there was no need for the name-calling.”

Anyways, if there’s one thing I’ve learned in my storied history of hilariously failed relationships, it’s that inevitably, one or both parties involved in the relationship are certifiably insane.  But, just because we’re all a little bit (or a lotta bit) crazy doesn’t mean that we’re all stupid; so naturally we would want to hide that crazy until we’re sure that the other person can really handle our particular level and brand of crazy.  Really, that’s the goal for all of us, to find someone whose crazy we can tolerate.

For people like me, that probably isn’t ever going to happen because I live in a bubble of delusion where I am, in my mind, not insane at all and because of this I tend to have an immediate disagreement with most people I meet who can see the bubbling font of manic insanity that I really am.  So, what’s a guy to do?  Either dream big and fail hard, or compromise.  Upon accepting the realistic limitations in finding a sane person to share one’s life with, we then turn to simply bargaining with ourselves about exactly how much insane bullshit we can reasonably tolerate based on how attracted we are to the person.  In this vein, I believe that I have made the definitive chart explaining how each of us rules out potential mates. 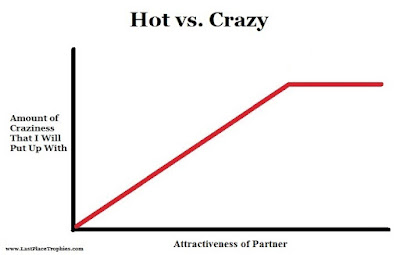 As you can see from this handy graph, the more attractive I find a woman to be, the more crazy behavior I can tolerate.  I can put up with a significant amount of insanity provided there is sufficient attractiveness.  I’m sure that me making this point is going to find some readers quite incensed with me, but I think it’s fair to mention that literally every single human being is shallow to some degree because I don’t think there is a single person out there saying, “I really want to date an unattractive, boring, unfunny, jackass” so I think it’s time for us to just be honest with ourselves about it.  We all try to look good so that we can find a mate that also looks good.  The whole idea of there being “leagues” or 1-10 ratings for potential objects of affect isn’t just some made up nonsense that comedians use as a talking point or a reason to put Jay Baruchel in movies; it’s a real thing that we, as naturally shallow creatures, came up with and secretly think about even when we say that we’re totally deep and can see past looks. 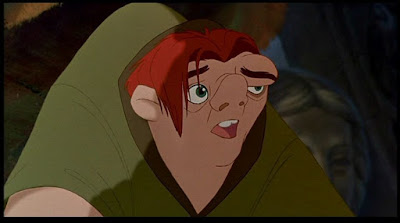 Don’t even try to pretend you’ve described your dream guy as this.   That hairstyle is awful.

And while I’m being honest, let me go ahead and update that graph just a bit. 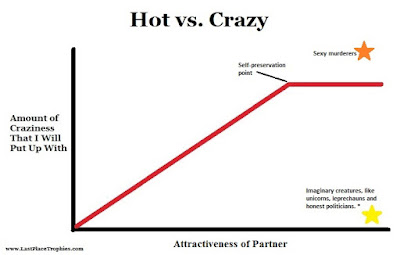 Of course, my girlfriend is also located at the yellow star because I am a lucky, lucky man (or possibly because she’s imaginary)

Looking at this graph, you’ll notice that I’ve specifically made mention of the self-preservation point (it was in the previous graph, but in this one I put words next to it).  Even though, for the most part, the amount of craziness I put up with increases with attractiveness, at a certain point my survival instincts kick in and I absolutely cannot fucking deal with any more of this bullshit because I am legitimately scared that you will tie me to my bed, steal my dog (which may also be imaginary) and burn down my house (which is definitely imaginary).  This keeps me safe from sexy murderers (the orange star) who, despite being attractive, are quite dangerous to my health.  You can also see that my girlfriend is good looking enough that I would be willing to put up with a whole lot of craziness that she, thankfully, spares me from (because she’s either really awesome or a product of my imagination…you decide!).  You just have to find your personal self-preservation point on the Hot-Crazy scale to decide exactly how much you’re willing to put up with for an attractive partner (there are some sexy murderers out there that need dates, if you’re comfortable with that).

Truthfully, you’ve probably seen images similar to this floating around the internet before, or heard other people mention something akin to this.  But, I don’t think they dig quite deep enough  See, if everyone just handed you a card that said “Hi, I’m tattoo-your-name-on-my-forehead-and-save-your-semen-in-a-jar crazy” upon meeting them, life would be a lot simpler and you’d probably see fewer break-ups on your Facebook timeline because people would run screaming from first dates before getting too involved.  That would also be the end of the graph as we would’ve put a tidy bow on the whole issue.  Unfortunately, as I hinted at in the beginning of the article, that’s not how the world works because, as soon as you meet someone you are actively involved in a game I like to call “Hide the Crazy.”  Hide the Crazy is exactly what it sounds like: you meet someone and you both silently agree to do your very best at acting like you’ve got your shit together and that you’re totally cool that he watched the latest episode of Game of Thrones without you because you don’t trip over small things like that and he’s acting like he really wants to hear about how your cat is just like a little person so please do go on in detail about how intuitive it is.

Unlike most games, you don’t lose at Hide the Crazy by letting your own guard down and informing the other party that you are, in fact, batshit insane.  No, it’s quite the opposite.  You lose at Hide the Crazy when the OTHER person let’s on to the fact that they are out of their mind and suddenly you’re sleeping on the couch and your clothes are outside in the bushes but you’re already too invested in the person to just up and leave because they were too good at the game and you don’t want all that time you spent cultivating a relationship to be for nothing just because she shaved off your eyebrows while you were sleeping because you said you actually aren’t that big a fan of that one sweater she likes to wear all the time.  See, you never lose at Hide the Crazy early on when there’s an easy out; it only happens after you’ve spent enough time in a relationship with the person where you have to seriously weigh out whether the amount of crazy that they’ve unloaded on you is worth throwing away the amount of time you’ve invested in them; because none of us like to feel like we’ve wasted time but we also don’t want to have the person we’re sharing a bed with to make a scarf out of our hair (unless you’re both into hair-scarves, in which case I think you’ve found The One).  Hide the Crazy takes even longer to find a winner than Monopoly and the emotional outbursts that result when someone loses the game are equally devastating. 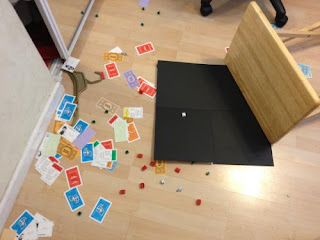 Interestingly, this is what it looks like when you lose either game.

There are two types of people (still) reading this article at this point: those that are saying, “Ryan has no idea what he’s talking about, my relationship is great and my significant other is not crazy at all,” and those who are thinking that this whole thing is making a lot of sense right now and have already packed an emergency bag and called a friend to set up a safe house situation with them for when shit goes down.  And maybe some of you are right and you totally have a beautiful Romeo and Juliet romance (where you’re both so crazy that both the two of you and a rival suitor all end up dead in a family crypt, but happily, put an end to your two families’ feuding).  Otherwise, I’d suggest just being extra careful and maybe take out some life insurance so your family doesn’t get stuck with your school loans.  At least until we can get people to start passing out these cards to potential love interests: 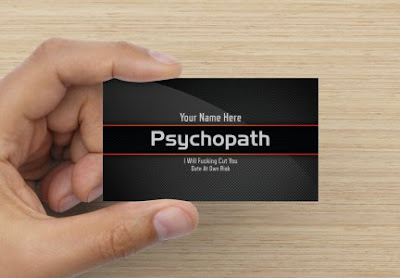