Slow start to this month.  You’ll notice a couple of things throughout this month’s jokes.  First of all, my references to my Halloween costume.  Secondly, I continue with the political jokes, which will thankfully end after the 8th of this month when we’re all required to use private servers that are easily hackable by 400lb Russians or when all forms of political humor are silenced by lawsuits filed by those who are offended by jokes about tiny hands and orange skin.   So, enjoy these while you can.

10/7
I got my Michael Jackson Thriller jacket for Halloween and was so stoked about it that I started wearing it immediately. Shortly after, I saw a someone I knew walking with their kid, so I smiled, waved and played a little peek-a-boo with the kid.
To any observers, all they saw was someone dressed as MJ smiling at other people's children. Damn.

10/9
Last night a few friends at I went out to the bar. At one point, one of the friends and I exited the bar to go to the bathroom (the bathroom in the main area was less crowded than the one inside the bar). Apparently, in between the time we exited the bar and got back to the entrance, they started charging a $5 cover and handing out wristbands to show you'd paid your cover. We did not have wrist bands. We also did not have cash on us for the cover charge. Conveniently, there was a nearby ATM. Inconveniently, the ATM was inside the bar that I needed the cash to get into. I ended up having to pass my debit card to one of my friends who was still inside the bar to get cash from this ATM, which charged me a $4 fee, to be able to pay for my friend and I to get back into a bar which we had already been in.
I paid $14 to take pee.
Also, I made this sweet picture of the set up. 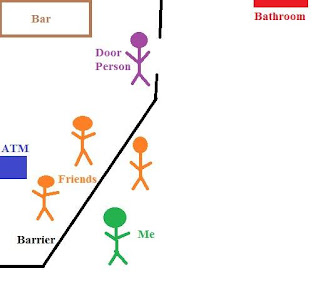 10/9
You know the asshole bully antagonist that was in basically every single 80s movie ever? Trump reminds me of all of them rolled into one awful orange person.

10/12
I really haven't done much writing lately. And I think a lot of that stems from the fact that nothing I write could be anywhere near as big of a joke as this presidential election.

10/13
I got stuck driving behind a brand new Corvette (temp tags still on it!) going 19 mph. Judging by the age of the driver, he'd just traded in his Flintstones car for it and wasn't used to having a gas pedal.

10/13
All the TV's in the bar froze and I'm slightly worried that I've stumbled upon a tear in the space-time continuum.

10/15
When you're time-traveling and you accidentally break shit. 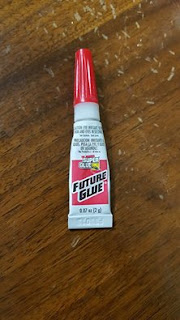 10/19
Is Billy Bush gonna be at the debate tonight?

10/20
My summary of last night's presidential debate.
I spent an uncomfortable amount of time working on this picture doing Google image searches of "Donald Trump" and "High resolution asshole," which turned out to produce the same results.
P.S. - Trump totally would bleach his mouth-asshole. 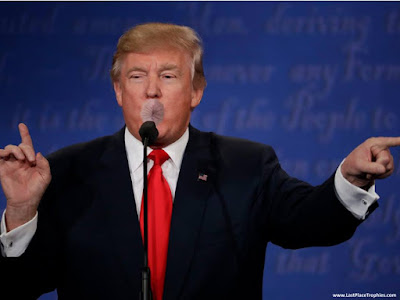 10/23
Kahla wanted a picture but I got distracted because I noticed someone bringing out a plate of hot wings. 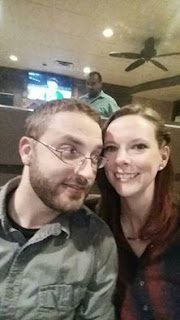 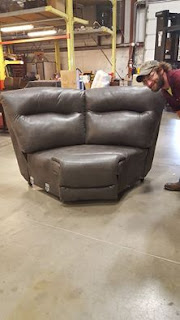 “It's looking forward to touching some butts.” – Kahla

10/29
In case anyone needs a last minute costume, for just under $4 you can be a shithead. 10/31
At one point this weekend I spent a good 10 minutes trying on women's belts in Wal-Mart while dressed as Michael Jackson.
Because, whatever...I don't need to/can't excuse myself for who I am and what I do.

Fingers crossed that I’ll be able to post another one of these next month!