November was all about nostalgia.  I have a joke about a song from 2004, a movie from 1999, another movie from 1985, and video games ranging from 1991 to 2002.  Apparently I am trying hard to forget that I am aging not-so-gracefully and delving into the past HARD.  But you know what, fuck it! It’s getting colder and shittier outside and I’ve got 5 trees worth of leaves and gumballs that I still need to clean up from my yard and there’s not enough damn sunlight to do it, so I will keep myself sane and happy by endlessly driving around Vice City in a Deluxo listening to Wave 103 (and kudos to you if you understood all of that).  Here are some old jokes. 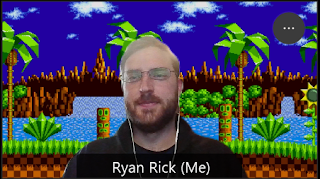 Today's school cafeteria lunch is chicken nuggets so my daughter has prepped for it by packing her own barbecue sauce in her backpack.

It's really nice to see the impact I'm having on my children's lives.

Gonna treat myself to a little nightcap. 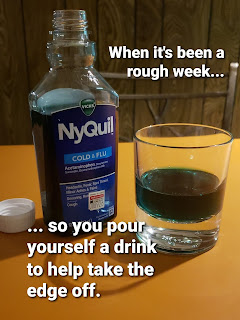 It's been a full month now since I completed the legal adoption of my kids. After talking it over with my wife, we agreed that I should refer to that as their "Gotcha Day."

I'm with my son and one of his friends at my alma mater for a STEM Day event with scouts. I walked them over to the student center for lunch and upon entering the building and seeing the layout and the signs listing the amenities my son turns to his friend wide-eyed and whispered, "Oh my god, college has everything!"

I don't even know how to play an ocarina. 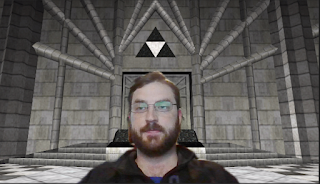 Bonus pic from my last work meeting background because the sunlight coming into the room made it look like I was warping into the temple. 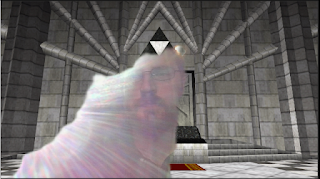 There's a reason why I've got that "Group Expert" designation for this hockey group. 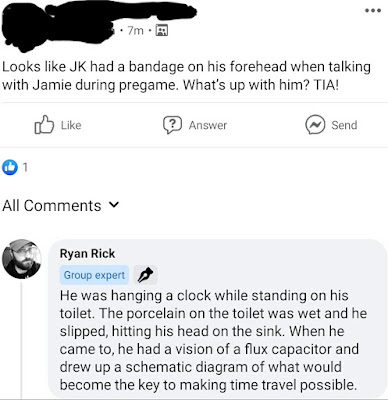 The song "Tipsy" by J-Kwon came out in 2004. Last night I was shocked to learn that the version of the song that I've known for the last 17 years was actually the radio edit.

I took my dog to the groomers yesterday. I think he's a little peeved at me for getting him a haircut when it's getting colder out because last night when I let him outside he turned to look at me and then immediately took a dump in the middle of our patio.

This picture taken shortly before I fell off the edge of the track for the 18th time. 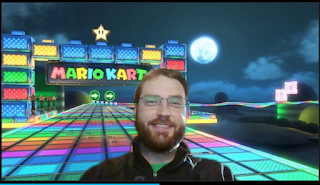 The 2 most recent snaps I sent to my wife. Barclay and I clean up nicely. 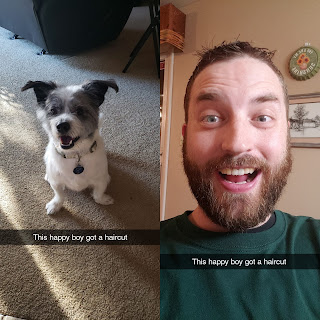 My son is supposed to bring in a family favorite recipe to school, so I'm helping him with that. But I told him he needs to write 7 or 8 paragraphs about random shit for his teacher to read before she gets to the recipe itself. 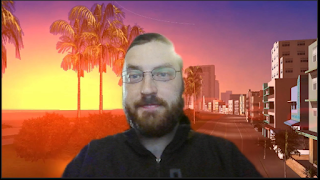 Found this online yesterday. I swear to god, if I see what looks to be some delicious wings and end up eating soap, everybody is gonna catch hands. This is just deceitful. 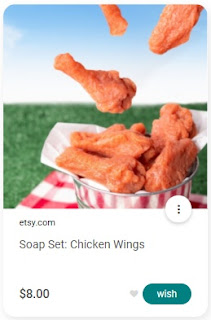 I really should do more to make use of my status as an ordained minister. Might just show up to some random churches, step up to the pulpit and say a few words.

This past weekend I finally watched The Matrix for the first time, a mere 22 years after its initial release. So, just in case anyone was wondering what my backlog of movies/tv shows to watch is like, there you go.

At this point I’m just trying to make it through the end of this year so that as soon as January rolls around I can start making a bunch of terrible jokes about dropping deuces.