Another month has come to a close and, accordingly, here is the round-up of my jokes from May.  Couple of notable things for this month, on the 12th I went to a concert and clearly spent most of my time just ragging on the bands that were there.  I changed jobs midway through the month, as evidenced by my joke about it and the absence of my desk pictures for the 2nd half of the month (the end of an era *sigh*).  And apparently, on the 16th I just lost my mind and was more useless than usual but felt inclined to make a bunch of jokes about it.  Enjoy!

5/4
This week's desk picture is a reminder both to treat others well and to enjoy life as much as possible. ‪#‎BeExcellentToEachOther ‪#‎PartyOnDudes‪ #‎WyldStallyns 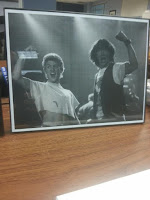 5/5
Taco Bell is giving away free biscuit tacos today. I think this is a perfect representation of America's understanding of Cinco de Mayo.

5/6
With so many people eating Mexican food and drinking yesterday, today's work day should be sponsored by Febreze and Charmin.

5/7
I've been sleeping with my window open lately and waking up to the sunrise and the sound of birds chirping, feeling fantastic. Kind of feels like I'm in a Disney movie. I just wanna sing with all the voices of the mountains and paint with all the colors of the wind.

5/8
Can you still sign up to take the ACT/SAT test even if you're 28 and have no good reason to be there? I want to get a group of people to sign up, sneak liquor into the test and drink every time we mark C.

5/9
"I haven't drank any more than you have and I'm probably sure I'm not gonna remember any of this." - ‪#‎Knuckles

5/11
This week's desk picture reminds me that with the right team you can overcome anything, whether it be ghosts, giant marshmallow men, or Carpathians. "Sometimes, shit happens, someone has to deal with it, and‪ #‎WhoYaGonnaCall?" 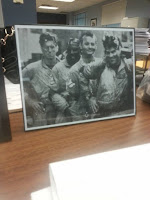 5/11
A study from the University of British Columbia found that women find happy men "significantly less attractive."
This makes me pretty unhappy

5/12
I don't know what band this is on stage, but the vocals sound like somebody tied a cat to one foot and a baby to the other, then starting jogging laps around a gravel parking lot. And I think jean jacket vests were a bold fashion choice.

5/12
One fun game to play with bands is to look at all of the band members and try to guess which one is angriest at their parents.

5/12
In all seriousness, if your band's vocals are unintelligible growls/screams, I am going to assume that your lyrics are just reciting a recipe for a mean casserole

5/13
Subway is implementing a new security system that sprays robbers with a traceable synthetic DNA that will stay on them for 7 weeks.
Are sandwich thieves that rampant of a problem? And couldn't they just spray the perpetrators with Sweet Onion sauce? ‪#‎StickyBandits

5/15
Today is my last day of work at TNi. I will be leaving my picture frame in the hands of a coworker. But I figured I needed one last inspirational picture that I think really sums up my existence. 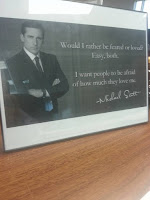 5/15
If you are talking on the phone in the bathroom I have no problem making obnoxious fart noises and unnecessarily flushing the toilet 6 times.

5/15
I sang (and totally nailed) "Somebody To Love" in front of a bachelorette party tonight. Afterwards, the bride walked up to me and introduced me to her friend. Almost immediately, the friend turned around to talk to someone else. I'm not even interesting enough to last through the attention span of a goldfish.

5/16
The microwave broke and I'm supposed to wait 22 minutes for this shit to cook in the oven. It's like I'm living in the Stone Age.

5/16
I watched a horror movie at 9 am because it was bright outside and I didn't want to get scared.

5/16
My biggest accomplishment today was getting a piece of popcorn kernel unstuck from my teeth.

5/17
NASCAR would actually be interesting if the drivers could throw out hazards at each other like oil slicks and spike strips.

5/19
First day at the new job. My strategy for success is to smell nice and have great hair.

5/20
I've spent my first couple of days at work focusing on learning everything I can about mattresses. I'm gonna use this knowledge to pick up women. "Hey baby, how about we go back to my place and I teach you all about mattresses?"

5/23
I think you've reached a new level of sophistication in life when you start your day off by drinking chocolate milk out of a scotch glass.

5/25
One of my favorite things to do at night is stay up late remembering every mistake I've ever made.

5/27
I had a dream last night that I got dumped. I'm not dating anyone. Apparently, even my subconscious wants some space.

5/28
I really enjoy when there are lane closures on the highway and mayhem ensues as people struggle to understand how to operate their vehicle when there's only one lane of traffic. Because single file lines were apparently not part of everyone's grade school curriculum.

5/29
‪#‎Knuckles: "An O'Fallon couple was sentenced to prison for keeping their artistic son in a cage."
Kyle: "Uh, do you mean autistic...?"
Me: "If you don't stop painting right now you're going in the cage again!!"

5/30
Spilled some food on my shirt. Went up to the bar and got some club soda for the stain and some whiskey for me. ‪#‎Adulthood

5/30
Note to self: Do not wear neon glow-stick necklace while driving home from wedding. Cops find it suspicious.


I hope I never think I'm too good for gas station nachos.

Hope you enjoyed it.  My next post should (hopefully) be something awesome (whenever I stop hating my own writing and actually post it), so keep an eye out for it!