My last post about Knuckles (that’s my roommate for any newcomers) was pretty well received.   And, as I expected I did hear some stories from people who encountered him at the bar after trivia that night.  It seems that the bulk of his energy that night was devoted to interrupting peoples’ conversations to tell them how much he hates me.  And that’s pretty much all the encouragement I need to make another post about all of his various shenanigans.   I do have some longer stories I’d like to put together for future posts (like the story of the road trip to New Orleans), but for right now I’ll do a compilation of some of his more isolated moments of ridiculousness.   So, here are some of Knuckles’ Greatest Hits (Volume 1).

-Knuckles hates most food (and the smell of most foods).  His diet consists almost entirely of: frozen pizzas, pizza rolls, fish sticks, hot wings, mac & cheese, fast food, beefaroni, Hamburger Helper, his mom’s spaghetti, soda and beer.  He is also seemingly allergic to physical exertion.  I have no idea how he is not 800 lbs.

-Knuckles will leave dishes in the sink for so long that he forgets that they were his dishes.  He then argues with me about why I’m forcing him to wash “someone else’s” dishes.

-Knuckles has extremely low alcohol tolerance.  And he blacks out constantly.  The last party I had started at 8 pm.  Knuckles was drunk at 8:45 pm.  He had drunk 2 beers.

-Knuckles never posts Facebook statuses.  After one particularly spirited night at the bar I woke up to find that he had posted on Facebook “I may black out but I bang bad bitches.”   Knuckles does black out, but he most certainly does not bang bad bitches. 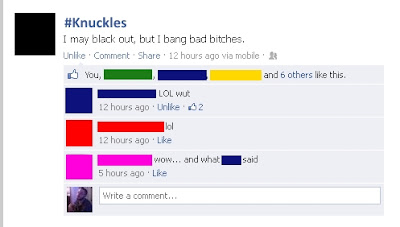 He deleted it as soon as he woke up the next morning.  Good thing I took a screen cap!

-Knuckles likes to turn on music to fall asleep by when he’s been drinking.  The alcohol inhibits his hearing.  One of the saddest things I’ve ever seen was when I woke up at 5 am to find Knuckles passed out in his room, curled in the fetal position with the song “Love Hurts” blaring.

-I have also had to ask Knuckles to turn down his speakers because the bass line for “Gangster’s Paradise” was shaking the living room.

-Knuckles often passes out with full beers in his hands.  His mattress is stained with beer because of this.  Once, he passed out on the living room couch with a beer in his hand and (predictably) spilled it on himself.  He then stood up, set his beer on the coffee table, dropped his pants and walked to his room (without his pants).  He has no memory of this.

-There is a bar near our apartment that we regularly go to (as do most people we know).  We know the owners, we know the staff and it’s usually a pretty good time.   One night, Knuckles leans over to the guy next to him and says, “I don’t like the bartender.  She’s ugly.”  It’s worth noting that the bartender is cute, always nice to us, and dating the guy that Knuckles said this to.  The guy (who knows Knuckles & vice versa) turns and says, “Knuckles, what the fuck? That’s my girlfriend.”   Knuckles walks away without saying anything else.

-Knuckles has a tendency to take 45-minute showers because he “starts thinking and forgets that he’s in the shower.”  Nobody has ever believed this excuse.  Ever.

I am under the assumption that people will thoroughly enjoy this post.  So I’ll probably start working on Knuckles’ Greatest Hits Vol. 2.  Keep an eye out for it.