This is my 50th post!  That’s (probably not) a big deal! About a year and a half ago I started this blog not knowing how long I’d be able to keep updating with new content, or if I’d even be able to do it at all.  But I went from humble beginnings and uncertainty on my ability to keep writing, to what you see here now a year and a half later: humble middles and an uncertainty over whether I should keep writing (I’m probably not even good at this).  I would say that I’ve come a long way, but I’m still pretty much writing the same stories as when I started because you stick with what you know and call it branding (thank you, marketing degree).

Originally, I had written an entirely different post for my 50th blog update.  But I realized that it was probably (definitely) terrible so I scrapped it and started fresh with an entirely new subject.  Maybe this one will suck less (I would cross my fingers but it’s hard to type that way).   Perhaps one day I’ll retool that scrapped article and it will be deemed worth of posting.   But there’s just as good of a chance that it will remain in post-purgatory forever.  And if nothing else, that should tell you how much I care about putting out quality posts for anyone out there reading.  And since I’m working so hard to create great things for my audience, I really think it would be cool if you all worked hard for me as well by going out of your way to share my blog posts with everyone you know (whether they like it or not).    But I know that my readers are far too intelligent to just blindly follow my words without some sort of convincing argument (I promise I’m not pandering), so here are 10 Reasons Why You Should Shamelessly Whore Out My Blog To Anyone And Everyone You Know:

1)      It’s (Probably) Funny
People often (sometimes) tell me that I’m funny.  And I believe them because I will mindlessly cling to any semblance of a compliment that comes my way (I also spend a lot of time wondering if they’re being sarcastic because I lack confidence).   But if you do find my blog utterly hilarious, you really should be sharing it with everyone.  And if you find it entirely pathetic, maybe you should share it anyways and maybe get me some pity views.

2)      You Don’t Hate Me
At least, I’m pretty sure you don’t.  You’re here, reading this, right?  Even if we’re not friends that’s gotta count for something!  Hell, I’ll even go a step further and say that you might even like me a little (just a little).  And because you like me, you probably should help me out by sharing this so I can get more views and you can seem cool to other people by saying that you actually know the guy writing these posts.  It’s a win-win.

3)      Fame
My two most popular updates I’ve ever posted on this blog were both about me being on TV, one suggesting that I host The Daily Show and one saying that I should have my own reality show on A&E.  And this could mean a few things, like maybe people really think I have a talent that should be showcased on television, or that people really just want to actually see me embarrass myself rather than reading about it on my blog.  Either way, if you keep sharing my blog, maybe you’ll see it happen!

4)      I’m Not A Dick
Despite what my roommate, Knuckles, might tell you, I’m not a huge asshole!  And I think that might be something that is worth rewarding.  Hell, I’ll even go a step further and say that making a non-dickish person like me famous could actually be a breath of fresh air in a world with so many famous dicks already.  I could even be a role model (please, don’t actually look up to me.  I make bad decisions and then publicize them to the entire internet.  Learn from my mistakes).

5)      Money
Obviously, with fame would come wealth.  And boy would I like to be able to pay off my school loans and stop eating ramen noodles and McDonald’s Dollar Menu (actually, I’d probably eat that stuff anyways because, as we’ve already discussed, I make bad decisions).  But it would be totally nice to pay off the loans for that degree that I’m not using.

6)      I’d Share the Wealth
Despite the offensive amounts of money that I’ll be making once I’m famous, I really don’t plan on living some crazy rock star lifestyle (partly because I can’t play guitar).   As mentioned already, I’ll have to pay off my school loans for my useless degree (can you tell that I’m bitter about that?), but after that I have no intention of pulling an MC Hammer (though I’ll probably buy some parachute pants), because I really don’t need a golden toilet in my (moderately sized) house.   So naturally, with the butt loads (is that an actual unit of measurement?) of money I’ll be making, I will have a lot of money to share with the people around me and put towards good causes (like dogs, because I love dogs.  And cancer, because I hate cancer).  Doesn’t that seem like the kind of guy you wanna support?

I'd look so good in this.

7)      New Inspiration & New Updates
Once I’m famous, I’ll have to jet-set all over the country, make appearances at swanky galas (whatever those are) and schmooze with influential types.  I’m sure I’ll attend some red carpet parties and the subsequent after parties (not sure what color the carpets are for those).  The important thing to take away from this is that I’m not even very good at living the life I lead now; I’m awkward and terrible.  And it’s made for some pretty fantastic stories.  Just imagine the fun stories I have when you throw me into the kind of new situations that my fame would bring.  There’s no telling where I’d make a fool of myself then.  You know you want to see that happen, because life is kind of boring without the opportunity to laugh at me.

8)      Taylor Swift
This one might be a bit of a stretch (it certainly isn’t the most plausible part of my list), but I have to include it.  Once I’m famous, I’m sure that at some point I’ll meet Taylor Swift and I will undoubtedly woo her.  She will fall in love with me (I’m sure she’ll find my awkwardness endearing), we will get married (we’ll both keep our respective last names) and we will live happily ever after as a new, very pale, power couple in the entertainment industry.  Also, she won’t be writing break up songs anymore because I would be the most gentlemanly gentleman ever.  And don’t worry, I’m not like super creepy and obsessed over her; photoshopping pictures of us together in my spare time. 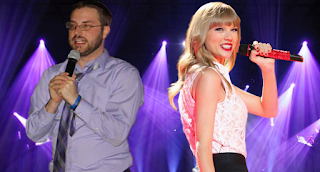 9)      I’ve Got Nothing Else
I know the life of a minimally successful blogger may seem pretty rad, but in all truthfulness I don’t really have a whole lot going on.  I go to work, come home and watch Netflix.  Sometimes I hang out with friends and play video games.   Or sometimes I go out and play sports (I’m totally athletic, ladies).   Other times I sit at home alone (in a totally not sad and pathetic way).   But even with all that, I have plenty of time to be handsome in public and on camera.  Plus, I’m a way better rolemodel than Kim Kardashian and the general public managed to make her famous (she doesn’t even write awesome blog posts like this and I suspect it’s because she’s illiterate).   I’m just a single guy (until I get the chance to woo Taylor Swift) with a roommate, a Knuckles and a bunch of free time that I don’t really know what to do with aside from writing for this blog.

10)   I’m Asking Nicely
Please share this.  Pretty please.  I took the time to even write you this nice blog post explaining how great it would be for you to help me out by sharing this.  I could have been totally rude and demanded you to advertise my blog for me, but I like and respect my extremely intelligent and attractive readers far too much to be anything but nice towards you.  Because I am humbled by your patronage of my site.  So, pretty please with cherries on top?

And there you have it; my totally underwhelming 50th post in which I grovel for your acceptance and you help in continuing to grow my audience.    I’ve only been working on this since my blog was sitting on 46 posts and I finally finished it just in time to actually make it my 50th post (before I post my next Joke Round Up and screw everything up).   Personally, I think this one turned out way better than my original 50th post that I wrote, but you’ll probably never know because I won’t let the original garbage post ever see the light of day (unless I get really desperate for content and find a way to spin it where we all just make fun of how terrible my writing is).  Here’s to 50 more (and beyond)!