It’s probably long overdue, since Knuckles’ Greatest Hits Vol. 1 was all the way back in June, but I think it’s finally time to get everyone caught up on the continuing saga of my roommate, Knuckles.  So, here is another compilation of his shenanigans that were not quite enough to have their own individual posts.

-Knuckles gets very opinionated and talkative about politics sometimes.  Especially when it gets close to election time.  One election in particular, he came back from voting before I had a chance to go and was regaling me with all of his stances.  So after I voted I told him that since I knew how he voted on everything, I voted the opposite to cancel out his votes.  He was not happy about this.   This was like 2 years ago. He still occasionally asks me, “You didn’t really cancel out all my votes that time, did you?”

-While barhopping one night, I arranged to meet Knuckles and some other friends at a particular bar.  I called Knuckles (who was drunk) and told him to instruct the person driving to park in parking lot next to Jimmy John’s.   5 minutes later, when the driver pulled up, despite the fact that Knuckles was the one who directed everyone there he started shouting, “Why are we at Jimmy John’s?  Are we getting sandwiches?”

-Knuckles is late for work a lot.  But instead of rushing around the house to get ready and run out the door like a normal person, he has a habit of calmly walking out to the living room where I am (because I go to work after him but am up and ready before him) and then explains to me what his excuse is for being late.  I don’t work with him and I don’t really care why he’s late.

-Knuckles set a new record for drunkenness since Volume 1.  My last party started at 8 pm.  Knuckles was drunk by 7:45.  That’s not a typo.

-After a night of drinking, Knuckles, myself and some of our friends often like to walk to the gas station down the road to get nachos.  One night in particular, Knuckles fell behind the rest of the group walking back.  When he finally got back to the apartment, he began banging on the door and shouting at us because he couldn’t open the (unlocked) door.  After we let him in, all he said was “My hands are full of cheese.”  When I went outside the next day there were cheesy hand-prints all over the door. 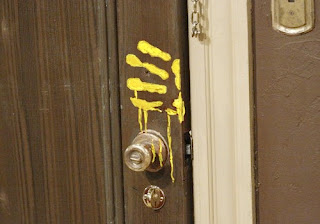 -Knuckles hates bugs.  He is also scared of the possibility of roaches being in the house (which is strange, because he always has dirty dishes an leftover food in his room).  He also seems to think every bug he sees is a roach (sorry, Knuckles, that is a waterbug/ladybug/cricket/housefly/etc).  One time I went out of town for the weekend and when I came back on Sunday, Knuckles informed me that he had seen and killed a roach in the bathroom on Friday.  He told me he wanted to show it to me so I could see what kind of bug it was, then showed me the piece of toilet paper still on the bathroom floor that he had used to smash the bug.  He left it on the floor all weekend just to show it to me.  I picked up the tp and showed him that there was no bug in it.  He left a piece of toilet paper on the floor all weekend to show me a bug that he didn’t even kill.  He still maintains that he killed the bug and has no idea how it could have disappeared from beneath the toilet paper.

-We have a 3 door medicine cabinet in our bathroom.  Knuckles always tilts the two outer doors inward when he is doing his hair.  He then leaves the doors tilted open (forever) because “it makes the condensation on the mirror dry faster.”  I do not know the science behind this.

-One morning myself and the other roommate, Kyle, both had to go to work, but found the bathroom door locked at 6 am.  After several minutes of banging on the door to no avail, I went outside and looked through the bathroom window to see Knuckles pantless and passed out on the floor curled up with the bath mat.  I had to climb through the bathroom window and wake Knuckles up.  Still drunk from the previous night, he proceeded to argue with me that he wasn’t drunk and that he wasn’t passed out.

-Knuckles has a tendency to drink milk, then leave the dirty glass in his room for a while until the bottom of the glass is crusted with dry milk.  He then puts water in the glass and leaves it sit on the counter for usually about a week until I finally get pissed off and put it in the dishwasher.  Every time I yell at him about this he contends that “Its gotta soak to get out the crusties.”

-Knuckles really likes wearing orange shirts.   This might not be that weird, but I think he has more orange shirts than the average person.

-When we all moved in to the apartment, Knuckles brought a lockbox with him and put it in his closet.  To date, nobody knows what Knuckles keeps in the lockbox but the leading theory is that it contains a copy of Lethal Weapon 2.  Knuckles loves Lethal Weapon 2.


-As previously mentioned, Knuckles is late for work a lot.  He has told me that I'm the reason he's always late. Apparently, I get out of the bathroom too late and he cannot possibly get ready for work in an hour. I suggested that maybe he shouldn't take a 45 minute shower but he quickly shot that idea down with, "No, I like long showers."  During this conversation he also told me that sometimes he gets in the shower even later because he falls back asleep while he's waiting for his turn in the bathroom.and that this is also my fault.

I can’t imagine that I won’t have more stories to tell, so I’ll keep compiling Knuckles anecdotes (Knuckledotes?) and release them in the future with Knuckles’ Greatest Hits Vol. 3!