I’ve posted before about my love for hockey and,specifically, the St. Louis Blues.  Well, recently (today!) an opportunity came up to attend a very cool Blues event, their annual Casino Night fundraiser, and all I had to do was write a 500 word essay as to why I should be chosen to attend.  I mean, I write things all the time and usually there is no prize involved whatsoever (other than the adoration of my readers, right?), so writing an entry for this was really a no-brainer (my favorite kind of brainer).  I also thought it would be fantastic to post on here because if I’m going to write something I would like to use it as a free update to my blog (also because it probably has a joke or two in it).  I think it's also interesting that I've been slow to write updates lately but I busted this out almost immediately (it's amazing what happens when you dangle a carrot in front of my face). Because I’m a perfectionist (also nerd), I hit exactly 500 words for my essay.  And because I care about you, I went ahead and highlighted those 500 words in gray so you know exactly what my submission is.  So prepare for me to take the podium and present my case: 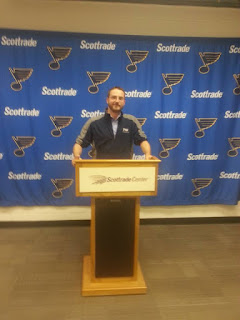 This is a nice podium.  Also, this is how you pander.

Obviously, you don’t want just any schmuck going to Casino Night, and I can assure you that I’m not just any schmuck.  I’m True Blue (but still a schmuck in my own regard). You want to vet my Blues fandom?  I’m 28 and can’t even remember a time when I wasn’t a Blues fan (and it’s not because I’ve drank too much in my life, probably). 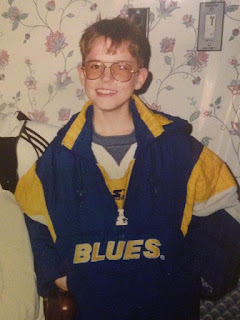 Look at that little Blues fan!

When I was younger, I was once grounded when I was supposed to go to a game. I had my ride pull the car up outside, action-rolled under the garage door, dove into the car and had the driver speed off before my mom had a chance to yell at me.  Consequences were totally worth it, plus I felt like an action star.  My dad once took a trip to Chicago and brought me back a Blackhawks shot glass as a souvenir.  I threw it in the trash right in front of him because that’s where garbage belongs.  I don’t believe there’s any excuse for walking out of a game and not honking your horn 3 times while driving home.  If I leave a game and still have my voice, I consider it a personal failure.  I fall into a deep state of depression in the off-season.  I coerced my favorite bar into creating a Blue Note shot for my friends and I to down with every goal (while I stand on a chair, swinging my shirt and counting them out). 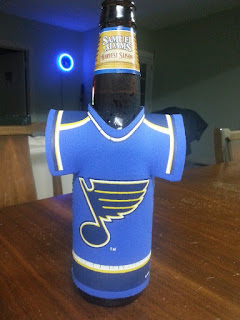 Even my booze loves the Blues.

You’ll also probably want a pretty cool person with you.  And I don’t think I’ve ever actually been a cool person but I can confidently say that I’m fun to hang out with.   Not to toot my own horn, but I’m pretty hilarious (toot toot!).  You wanna hear some funny stories, jokes and anecdotes?  I got you covered.  You wanna talk hockey, I can do that too (that’s why I’m here!).  You having a bad day and need a hug?  No worries bro, I got you.   Because I’m not the guy the table needs, I’m the guy the table deserves (or maybe the other way around; I never quite understood that quote). 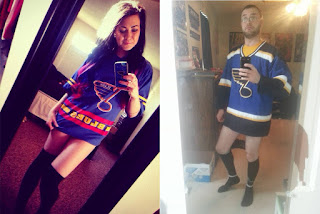 I’ve also done this.  Not sure if it helps my case.

But it’s not just about the fact that I’m a genuine Blues’ fan, either.  You need a sob story to seal the deal.  Since there is only 1 ticket up for grabs, guess who not only doesn’t have to worry about anyone being bummed that he’s going without them but who also couldn’t even find someone to go with him if he tried.  I mean really, I’ve seen more Blues playoff series over the last 4 years than I’ve had dates.  And even though the Blues only won 1 of those series, they’ve had a better success rate than the dates (and I was more devastated by the Blues’ losses).  And you know, in the midst of all that desperation, I still swipe left on Blackhawks fans.   Because I don’t need that kind of negativity in my life.  Let’s go Blues! 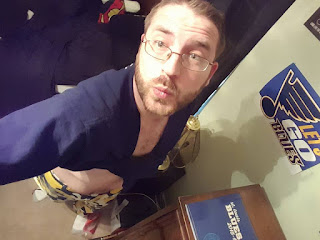 Look, sometimes I do things. I don’t have to explain myself.

Naturally, I’ll have to report back on whether or not this submission gets any traction, but I hadn’t planned on abandoning this blog and I’ll probably have to make a post about whatever shenanigans I get into should I get the chance to attend or I’ll write something about how sad I am and how many pints of ice cream I end up eating if I lose.  Either way you win (unless you don’t like reading what I write, in which case, why are you even here?).