Typically, when I write my posts I have an idea of where I want to start off, where I want to end and maybe a few points I want to make along the way.  This one is a little bit different.  I have an extremely vague idea of what I want to talk about and a glass of whiskey next to me so I feel like this is the best possible scenario for a freely flowing train of thought that may or may not contain bits of hilarity (probably not).  As I hope to have cleverly implied with my titular reference to a 90’s MTV dating game show, this post will be dealing with dating problems and being single. 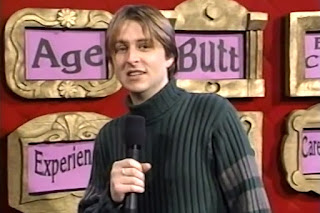 Also, because I’m a big fan of Chris Hardwick.  In spite of this.

One of the interesting things about being single is that a lot of people seem to be under the impression that you’re not aware that you’re single, or that you don’t at least have some basic level of regret about relationships that didn’t work out.  Now, in all honesty I’m not really bitter about being single and I don’t consider myself to be desperate (but maybe desperate people just don’t think they’re desperate).  If anything, I’m actually kind of picky when it comes to women and part of that is because any woman that I date has to be okay with the fact that, if things go well between us, Knuckles will be living in our basement when we’re married (feel free to refresh yourself on Knuckles).  Well, that used to be a requirement for my dates, but recently Knuckles has gotten a girlfriend so at this point it is more likely that I will be living in his basement.   Let me spell this out in the bluntest way that I can: I am the only single roommate in an apartment that includes Knuckles.  I am the lame roommate now.  When somebody coined the term “clinical depression” this was the exact scenario that they envisioned.

The inspiration for this actually came while I was out to dinner with a couple of friends (friends that you may remember from Pita Pitiful).  I was telling them about my latest dating failure (which I hope to have typed up and posted soon as well) wherein I was asked out by a girl and then later shot down by said girl (I assume it’s because I am a horrible date once you actually get to know me).  Recounting my numerous dating failures is kind of standard fare for any time I’m out with friends.  Really, almost any time I’m out with friends they will at some point mention how they’re surprised I’m single (they shouldn’t be) or that they think I’m a great guy (I’m probably not).  And then immediately following that is the question of whether or not I’ve considered online dating.  Yes, I have considered online dating, but to me it seems like it would just be website where I can sign up to buy dinner for people.  Overall, that’s probably healthier for me than just buying 2 dinners for myself, which we all know that I’ve done, but it seems like a lot of hassle to sign up for a website when you could really just ask me to buy you dinner and I’d probably do it.  Maybe that would be my profile on the dating website: “If you like free dinner and don’t really give a shit about who you’re eating with, message me.” 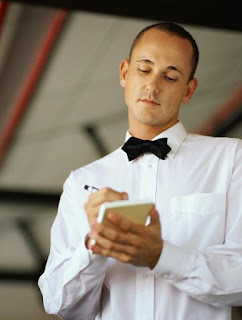 “I notice that you’re pathetic and your date isn’t really into
you, sir. Might I suggest a drink to pair with your sadness?”

Truthfully, as much as my friends feel the need to remind of my constant state of singlehood and numerous dating failures, it’s arguably even worse around family.  I’m basically the only person in my family that’s single.  In fact, within the last couple of months both my sister and my step-brother got married and my cousin got engaged.  And my family makes it a point to remind me frequently of what a sadsack I am (I don’t think they’re trying to be malicious, but it’s a possibility).  Whenever I’m around family there’s a gauntlet of questions about whether or not I’m seeing anyone (I’m not), why I’m not seeing anyone (because I suck) and when I think I’ll be seeing someone (just as soon as I can fool someone into loving me).  My favorite question that invariably comes up is always, “What happened to (whatshername)?  I liked her.  I wish you were still with her.”  And it’s that kind of support that really means the world to me and makes me re-evaluate all my relationship decisions up to that point.  I mean,  the realization that my family liked a girl certainly gives me the option to go back in time and make her un-dump me.  I can imagine the conversation now:

Ex: “Hello?”
Me: “Whatshername! Hey, great news!”
Ex: “Why are you calling me?”
Me: “My family just let me know that they really liked when we’re together.  So, I’ve decided to look past the fact that you dumped me and shit all over my heart so we can give us another chance.”
Ex: “Have you been drinking?  It’s 2 in the afternoon, Ryan.  Move on.  We’re done.”
Me: “I know, this is all happening so quickly.  But why don’t you come on over to my parents' house.  We’ll have a nice dinner, catch up and start planning the wedding.  Trust me, my parents will love it.”
Ex: *click* 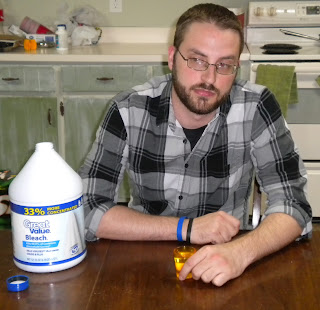 I like to think I’m a clever person though (I’m slightly delusional), so I’ve taken my own measures to get back at my family for the frequent badgering about my relationship status.  The way I see it, they’re probably just worried that my lack of a girlfriend is an indication that I don’t have my life together; so I take that idea and run with it (because I’m an asshole).  So, sometimes when I order things online I’ll have it shipped to their house if it’s an item that makes me seem really immature.  To date, some of the more notable shipments that have arrived at their front door have been a beer pong table, a case of Yoo-hoo and a set of sweet new water guns.  It’s my own little way of saying, “Hey guys, I’m still fucking up but look at all the cool shit I can buy with my single-money.”